Pokémon Emerald Version Japanese box cover art.
Pokémon Emerald is a title in the Pokémon series of video games. It features the Dragon/Flying-type Legendary Pokémon Rayquaza on the cover.

The game is an enhanced remake of Pokémon Ruby and Sapphire, adding to the third generation of Pokémon games. Much like the games it was based on, the player controls a Pokémon trainer, whose general goal is to traverse around the Hoenn region and conquer a series of eight Pokémon gyms to earn eight Gym Badges and then take on the Elite Four, defeat the Pokémon League Champion and succeed him/her. Like Ruby and Sapphire, the game features the third generation Pokémon, but also adds some second generation Pokémon that were once limited to Pokémon Colosseum. The National Pokédex is also available without trading.

The game follows the same storyline as Ruby and Sapphire, through it adds new elements such as the Battle Frontier, where the player can enter a variety of areas with different Pokémon competitions.

The main antagonists that the player faces are Team Magma and Team Aqua, which differs from Ruby and Sapphire in which one team was the antagonist and the other was the protagonist, trying to stop the other team. Instead of one team awakening a legendary Pokémon, both teams succeed in each awakening a legendary Pokémon: Groudon and Kyogre. The two Pokémon do not obey either team and begin fighting, causing the weather to alternate between sunshine and rain. The player must awaken the legendary Pokémon Rayquaza, after which it will swoop down and force the two combatants to stop, returning Hoenn to normal. In the beginning there is 3 Pokémon to choose: Treecko, Torchic, and Mudkip.

Once the player defeats the Elite Four, Norman gives the player the S.S. Ticket for the S.S. Tidal at the player's house. A news bulletin appears and says that a colored Pokémon is in flight through Hoenn. A little later, the player receives a phone call, whereupon he or she will be allowed to enter the Battle Frontier through the S.S Tidal. Latios and Latias can later be found roaming across Hoenn.

The Battle Frontier is divided into seven areas, one of the areas being the Battle Tower, and the others, completely new. When the player wins matches, he or she gains Battle Points, which can then be used to purchase prizes. After several consecutive victories, players will face the facility's Frontier Brain, who will be awarded with a Frontier Symbol (The equivalent of a badge).

The Pokémon that appeared in Ruby and Sapphire that were not transferred into Emerald are: 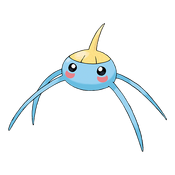 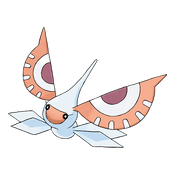 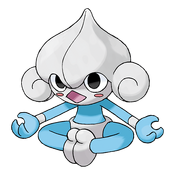 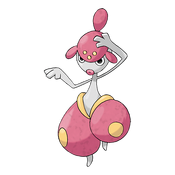 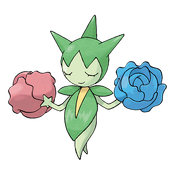 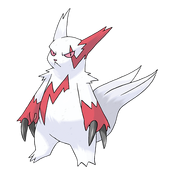 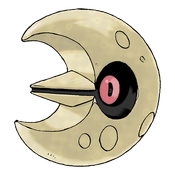 Pokémon Emerald has been generally well received by both gamers and reviewers alike. However, Eurogamer gave Emerald a score of 6/10, praising it for looking better than either Ruby or Sapphire and for having harder and longer gameplay, but criticizing it for being more of a "director's cut" than a half changed update, with most of the game still resembling that of Ruby and Sapphire. The changes and additions in the game have been considered by many to be major ones, and the popularity of the Pokémon franchise has seen the game meet commercial success. Emerald was 2005's second best-selling game in the United States, and went on to sell 6.32 million copies, making it the third-best selling game for the Game Boy Advance. 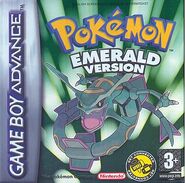 The European boxart for Pokémon Emerald.

The Japanese boxart for Pokémon Emerald.

The title screen for Pokémon Emerald.