Pokémon Wiki
Register
Don't have an account?
Sign In
Advertisement
in: Generation V games, Pokémon Games, Side Games,
and 2 more

Pokémon Dream Radar Japanese logo art.
Pokémon Dream Radar (ポケモン ARサーチャー, Pokemon AR Sāchā, literally meaning: "Pokémon Augmented Reality Searcher") is the second downloadable game in the series and it featured Augmented Reality view to capture Pokémon, collecting Dream Orbs and Items in the Interdream Zone. It can transfer the captured Pokémons and Items to the Pokémon Black and White Versions 2 in the Nintendo 3DS to give the players fill up in their Pokédex.

The main story of the game goes about the legendary trio Tornadus, Thundurus, and Landorus that are shown in their Therian Forme in the game.

As assistant of Professor Burnet, the player enters the Interdream Zone to capture Dream Orbs for Professor Burnet's research by destroying the Dream Clouds by using the Beam that has already been equipped. It is known that there are two kinds of clouds in the video game, there is a pink and a gray glowing cloud.

Pink clouds increase but also decrease in size, when a Pink Dream Cloud has been hit by the beam it will break into three Dream Orbs, but they can also break into four or five Dream Orbs if hit when they are largest. The glowing clouds has a more glowing appearance that can be compared as a stormy cloud. When a Glowing Dream Cloud has been hit by the beam it will break into four Dream Orbs, or sometimes in the glowing clouds a Pokémon is hidden. You will begin with about 5 Dream Clouds, which can be grow after getting some extensions in order to collect more Dream Orbs. Dream Orbs will fade after a failing attempt to capture them with the beam. After that the player hits all of the Dream Clouds it will get out from the Interdream Zone which it have to wait to restore the Dream Clouds in order to collect more and more Dream Clouds. A Dream Cloud can break into five or four more Dream Orbs, once obtaining them all one of them might split into three more, then again one of them will do the same as until you are late to capture one of them. The duration is extremely short afterwards which it will disappear extremely quick or is not evenly easy to hit.

As stated, Pokémon are also trapped in the Dream Clouds, but they are mostly trapped in the Glowing Dream Cloud. As seeing one of them from the clouds you have to capture him with the beam which you must press rapidly after capturing it with the beam on the glowing sphere which contains a Pokémon. Pokémon may differ in different extensions which will upgrade after obtaining enough Dream Orbs. The Kami Trio in their Therian Forme cannot be found in the glowing clouds, they appear in special extensions and you will encounter their appearance instead of a shining sphere.

You can upgrade your equipment after collecting a large amount of Dream Orbs. Actually, Dream Orbs also serves as money to obtain certain equipments, support items and upgrades. The game has also an auto-save feature to save the player's in the game.

Each Pokémon that you encounter in the game will have different levels depending on how many Gym Badges you've collected in Pokémon Black and White 2. The maximum level of encountering a Pokémon is until Level 40, which starts from Level 5.

There are various extensions which can only be accessed after obtaining a certain amount of Dream Orbs. Each extension has a difference in Pokémon and Items, but there are also special extension in which the player can capture a legendary Pokémon or one of the Kami Trio, the main Pokémon of the video game.

Professor Burnet has a development laboratory where you can upgrade your equipment in capturing Pokémon, finding more items or gaining more time in capturing Pokémon or get more Dream Clouds. In order to obtain such equipments you have to give Dream Orbs. Each equipment has their own cost of Dream Orbs which will be more expensive after getting previous version of the equipment. But, in order to capture the Kami Trio those equipments are needed, because they will be hard to capture after and after.

You can encounter different kinds of Pokémon and items in the extensions that you are playing in. Each Pokémon has a hidden ability with the exception of Rotom, which shows the same ability Levitate. You can meet also some rare Pokémon after collecting a large amount of Dream Orbs which is also the progression of the video game. There are also Legendary Pokémon to capture, but they only appear in special extensions.

Available from the start 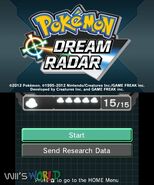