Pokémon Crystal Version Japanese box art cover.
Pokémon Crystal is the sixth main series game (seventh in Japan), the third game of Generation II and the updated version of Pokémon Gold and Silver. Crystal gained notoriety as the first main series game to feature animations for Pokémon and has a unique storyline involving Suicune. It was also the first Pokémon game to feature a female playable character, Kris. Crystal was the only main series game exclusive to Game Boy Color. Crystal has infrared connectivity to the Pokémon Pikachu series of pedometers, which utilize the mystery gift feature to give the player items based on steps taken and points earned.

Unlike in Pokémon Gold and Silver, the Legendary Beast Suicune appears in various locations around Johto. Once Suicune has been met in all these locations and the Clear Bell is obtained from the Radio Director in Goldenrod, the player can meet Suicune in the Tin Tower. Suicune will not flee this battle. The other two Legendary Beasts, Raikou and Entei, are unchanged and still roam Johto. Lugia and Ho-Oh can be obtained in this game, however, they both appear at Level 60, and Ho-Oh cannot be caught until all three Legendary Beasts have been.

A new character called Eusine is introduced as a pseudo-rival to the player. He is seeking Suicune and will fight the player to earn Suicune's respect.

The Ruins of Alph contained more common Unown and had a new subplot, where completing puzzles allowed the player to find hidden messages left by the Unown.

Trainers who call using the cell phone may now offer the player items or information on in-game events. They now also have distinct personalities.

A new radio show, Buena's Password, was added. By remembering a specific password used on Buena's show, the player can talk to her in the Radio Tower and receive points. These points can be redeemed for prizes.

The Dragon's Den has been expanded and the hut is now enterable. To receive the Rising Badge, the player must chase Clair to the den after the battle and speak to the Dragon Clan elder, Clair's Grandfather. He quizzes the player and if all answers are correct, the player will obtain the Rising Badge and a Dratini that knows Extreme Speed. 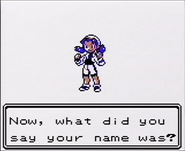 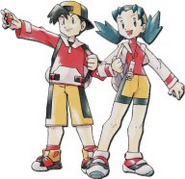