A Pokémon Contest is a competition where Pokémon Coordinators enter alongside their Pokémon. In the anime, Pokémon Contests are held in many cities and towns of a region while in games they are rarer. These contests are held in buildings known as Contest Halls. The idea behind this type of competition is about captivating your Pokémon's style. Winners of a contest receive an honorary ribbon or in Kalos, a Princess Key. After Coordinators collect five ribbons of a region, they are allowed to enter the region's Grand Festival.

Each move has their own effect, which can vary from upping the user's score to changing the order of appeals. In Pokémon Contests and Pokémon Contest Spectaculars, a move can also bring down other Pokémon's score, which is known as "jamming". However, a move used should be correspondant to the condition of the contest. For example, if a player entered a Beauty Contest, moves that have the condition "Beauty" should only be used, otherwise any other kind of move can have a negative and/or less effective effect on the user.

In this round, the judges base a trainer's Pokémon by their condition. The condition of a Pokémon falls under the same five condition categories as their moves. Pokéblocks are used as a source to up one or more of a Pokémon's conditions.

In this part of the competition, there are four turns to have a trainer's Pokémon perform a move to impress the judges. These moves are reflected by the contest section trainers enter in. For example, if entering in the "Beauty Contest", then its best to use "beauty-type" moves.

In this round, Pokémon are judged by their condition (in a similar manner to how Pokéblocks were used, poffins are used here for upping the condition(s) of a Pokémon) and how well dressed they were based on the contest type picked.

In this round, each Pokémon have to make up dance steps (up, down, left, or right) and the other Pokémon have to follow them. The lead Pokémon has to make up a step within the certain bar time, with the total amount of steps being four. Based on the actions of a Pokémon leading and following, will decide its score.

These rounds work the same as the move rounds in Generations III and VI.

Contests are held under a Single Performance or Double Performance rule. The Judges are usually Raoul Contesta, Mr. Sukizo and Nurse Joy. There is also an announcer who introduces the contestants and comments during the battles.

The first round involves the Coordinator's Pokémon demonstrating its moves in an appealing manner. This is usually done through a Pokémon or group of Pokémon using moves or combining multiple moves to create visually stunning performances in order to wow the judges. During the appeal, the judges score the Coordinator's performance. Those with the highest scores proceed to the next round. The amount of people varies for every Contest.

Upon registering for a contest, this card is given to a Coordinator as a means to of official evidence of their entry.

In games, these items are given to Coordinators alongside their Contest Pass after registering, while in the anime, these items have to be bought. Ball Capsules are purple, see through, ball-shaped items used as a medium for Pokémon Seals to operate. After applying a seal to a Ball Capsule, you would put the Ball Capsule around the Poké Ball. With this appliance, when a Coordinator releases their Pokémon, special effects specific on the seal will emit from around the Pokémon to make for a showy entrance.

Brendan and May in a Pokémon Contest 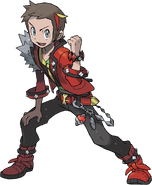