Nintendo DS
Pokémon Conquest (Japanese: ポケモン プラス 信長の野望 Pokémon Plus Nobunaga no Yabou; Pokémon + Nobunaga's Ambition) is an spinoff crossover of the Pokémon series and the Nobunaga's Ambition series. It was released for the Nintendo DS in Japan on March 17, 2012 and was released in North America on June 18, 2012. The setting of the game is the Ransei region, a region that resembles feudal Japan where defeating 17 castles allows a person to control the country. Hisashi Koinuma, the partner company CEO of Conquest tweeted that there's much unfinished in original game. They can make a sequel as Pokémon company CEO has special interest in Nobunga Ambition series.[1]

In Pokémon Conquest, 200 Pokémon appear in the Ransei region from the first five generations. 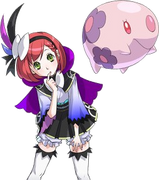 Mistunari Ishida
Add a photo to this gallery

Retrieved from "https://pokemon.fandom.com/wiki/Pokémon_Conquest?oldid=1334496"
Community content is available under CC-BY-SA unless otherwise noted.