The new games were revealed in a worldwide Pokémon Presents presentation on February 26, 2021.

Changes from Diamond and Pearl 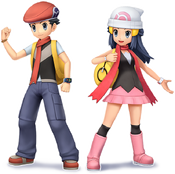 Artwork of Lucas and Dawn

Artwork of Turtwig, Chimchar, and Piplup

Dialga and Palkia alongside their respective game version logos