Game(s) in other languages

The game has a brand new story than the previous games, having a new plot and features.

The games are set two years after the games Pokémon Black and White, and the Unova region has changed drastically with new locations and Pokémon from previous generations. The player - Nate, the male protagonist, or Rosa, the female protagonist - starts in a location southwest in Unova called Aspertia City with Hugh, the player's rival. They are given a starter Pokémon - Snivy, Tepig, or Oshawott - by Bianca, who is now Professor Juniper's assistant. As they venture out in Unova, they will challenge new and old Gym Leaders and encounter the new Team Plasma, while also meeting the old Team Plasma.

Near the end of the game, the Neo Team Plasma's plan is revealed. They want to freeze Unova using their technology and the power of the legendary Pokémon, Kyurem. At the Giant Chasm, Ghetsis orders Kyurem to freeze the player! Thankfully, N and his dragon (Zekrom in Black 2 and Reshiram in White 2) save the player in time. Ghetsis then uses the DNA Splicers that were stolen earlier on Kyurem, whose frozen wings shatter, revealing a set of energy absorbing node-like appendages! Kyurem then blasts N's dragon, sealing it back up in the Dark/Light Stone! Then under Ghetsis' orders, Kyurem absorbs the stone, fusing the two dragons together to make an even stronger dragon, Black/White Kyurem! The player then defeats the dragon, separating it back into two, N's dragon is given back to him, while Kyurem flees to regain its strength. After a battle with Ghetsis, he suffers a mental breakdown and is taken away by the Shadow Triad.

Over the set of two years since Pokémon Black and White, locations have drastically changed. Areas such as Challenger's Cave are no longer accessible. Other areas have changed such as Route 4, which has completed its construction to varying degrees depending on the game. The southwest now contains locations, such as Aspertia City, Floccesy Town and Virbank City. Several new locations previously inaccessible can now be explored, such as the Castelia Sewers.

The Pokémon World Tournament is a new feature in which trainers can partake in a tournament against other trainers in a single or double battle. It is held in Driftveil City, hosted by Cynthia, the Sinnoh League Champion.

Pokéstar Studios allows the player to star in movies varying in genre. Such movie genres include action, horror, and many others. Characters such as Brycen and Sabrina play roles in Pokéstar Studios.

Changes from Black and White

The Unova Pokédex received an upgrade and now features a total of 301 Pokémon, containing Pokémon from every generation.

Like the predecessors, swarms - or mass outbreaks - activate after receiving the National Pokédex. Swarms change each day at midnight. To determine where a swarm is located, the player can check the gate and read the moving screen.

Choosing your gender in Pokémon Black 2

Choosing your gender in Pokémon White 2

Corless at the game's beginning

Corless and the player

Corless and the player

Roxie's gym, reminiscent of a stage

Outside a beach hut with Marlon

On a beach with Marlon 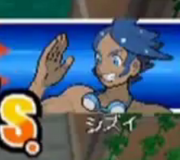 Player outside the PokèStar Studios building

Running in a marketplace

A few of the new Pokémon available in the games

Battling Pokémon between the pairs

Retrieved from "https://pokemon.fandom.com/wiki/Pokémon_Black_and_White_Version_2?oldid=1423422"
Community content is available under CC-BY-SA unless otherwise noted.