Pokédex electronic devices are a line of toys that have been produced to replicate the Pokédex peripheral from the Pokémon video game series/anime.

Companies in America such as Hasbro, Bandai, Jakks Pacific and at one time Tiger Electronics market the Pokédex to children by giving them a simple interface, and designing them closely to the specifications given in the Pokémon Metaverse, including the all-important Poké Ball logo located somewhere on almost every one of these devices.

The color red is also an important part of the design of the Pokédex, with the only notable Pokédex toys not in red being the one Johto replica to make its way to America in a gold coloring, and the Unova Pokédex which features a black body and a red Poké Ball pattern with buttons worked in. The Unova Pokédex from Jakks Pacific has the most noticeable deviation from the design featured in the games/anime, with one screen being completely left out and replaced with a sticker.

All of these toys list Pokémon in some way, the differences in listing being based on the ownership of certain cards or earning Pokémon information through mini-games. Originally, the Tiger Electronics Pokédex releases were just reference tools with no other features except for password settings, favorites listings and a journal mode in the generation two golden Deluxe Pokédex. Some Pokédex variations have theme music that plays while the Pokédex is active and cannot be turned off.

Jakks Pacific is the current manufacturer of all American Pokédex models, having bought the rights to their production from Hasbro in 2007. The only Pokédex that appears in both the video game series and the anime to never have a counterpart toy released in America is the redesigned Johto Pokédex from HeartGold and SoulSilver. Japan has released this Generation IV Pokédex with one screen and a stylus to navigate the touch interface.

Deluxe Pokédex: Johto, 2001. Tiger Electronics - Comes in gold and is the only American Pokédex designed to replicate a Johto model.

Advanced Pokédex: Hoenn, 2003. Hasbro - Features a camera decal on the inner cover.
Cyber Pokédex: Hoenn, 2004. Bandai - The only Pokédex released by Bandai in America, it connects to other Cyber Pokédex units along with the Cyber Poké Ball Gen 1, Gen 2, and the Cyber Superball versions one and two.
Talking Pokédex Game: Kanto, 2005. Hasbro. - Features a gender specific option at the start of gameplay.
Deluxe Talking Pokédex: Kanto, 2007. Jakks Pacific. - Has lights, theme music and a voice narration for every Pokémon.

Black and White Regional Pokédex: Unova, 2011. Jakks Pacific. - Has a sliding bottom screen and a decal featuring Reshiram and Zekrom in place of the first screen. Unfortunately, has only 45 of the Unova Pokémon.

This is the original Kanto Pokédex toy from Tiger.

This is Ash's Talking Pokédex from Hasbro with Thinkchip Technology.

This is the only Johto Pokédex released in America, produced by Tiger.

This is the Advanced Pokédex by Hasbro which is navigated using a click wheel.

This is the Cyber Pokédex from Bandai.

This is the Talking Pokédex Game by Hasbro with gender specific options offered to players. 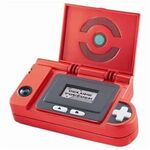 This is the Kanto Gen 3 Pokédex from Jakks Pacific marketed as the Deluxe Talking Pokédex.

This is the Sinnoh Pokédex released by Jakks Pacific.

This is Jakks Pacific's National Pokédex toy that lists 439 Pokémon.

This is the Jakks Pacific Unova Pokédex with one screen rather than two.
Add a photo to this gallery
Retrieved from "https://pokemon.fandom.com/wiki/Pok%C3%A9dex_Toys?oldid=1119247"
Community content is available under CC-BY-SA unless otherwise noted.