The Pokédex (ポケモン図鑑, Pokemon Zukan, lit. "Illustrated Pokémon Encyclopedia") is an electronic device designed to catalogue and provide information regarding the various species of Pokémon featured in the Pokémon video game, anime and manga series. The name Pokédex is a neologism including "Pokémon" (which itself is a portmanteau of "pocket" and "monster") and "index". The Japanese name is simply "Pokémon Encyclopedia", as it can feature every Pokémon on it, depending on the Pokédex.

Each game has a different style of Pokédex, somewhat resembling the handheld it was released on. In Pokémon Red and Blue, it is held vertically, like the Game Boy. The Pokédex in Pokémon Gold and Silver is also held vertically like a Game Boy Color. In Pokémon Ruby and Sapphire, it is held horizontally, like a Game Boy Advance. The one in Pokémon FireRed and LeafGreen is horizontal with a fliptop, like a Game Boy Advance SP (although the GBA SP is actually vertical in design). The Pokédex in Pokémon Diamond and Pearl resembles a Nintendo DS Lite, with two screens and a microphone on the hinge.

In the Pokémon continuity, the Pokédex was invented by Professor Oak, a respected professor in the science of Pokémon. However, later on, it was mentioned that the Pokédex entries were written by Professor Westwood of the Seafoam Islands. The movie Pokémon 4Ever explains how Professor Oak travels into the future when he is a small child and Ash Ketchum gives him the idea to create the Pokédex. The Pokédex is given to you by Professor Oak, Elm, Birch, Rowan, Juniper, or Sycamore in the video games at the beginning of your journey.

In addition, the term "Pokédex" has expanded to refer to any comprehensive guide to Pokémon in the video games, more specifically, a listing of Pokémon detailing information such as their stats, locations found, moves learned, and Egg Groups. Numerous versions of this type of Pokédex can be found both online (i.e. on serebii.net) and in printed book form (i.e. the Prima Pocket Pokédex). This detailed information also includes height, weight, species type, and a short description of the Pokémon.

The reward for filling the entire Pokédex is a special diploma from the in-game Game Freak staff, who make a cameo appearance in each of the games. Additionally, in Pokémon Emerald, by obtaining all 201 Pokémon that appear in Hoenn and finishing the Hoenn Pokédex, the player earns a Totodile, Cyndaquil, or Chikorita from Professor Birch, though it is not necessary to catch the legendaries.

In Pokémon Gold, Silver, and Crystal, there is an Unown Pokédex. This is an extension of the regular Pokédex, which shows the player's progress in catching all of the various Unown Pokémon. Completing the Unown Pokédex allows the player to print messages displayed in the Unown alphabet using a Game Boy printer. In the HeartGold and SoulSilver games, the Unown Pokédex makes a return, but is now known as the Unown Report. It can be obtained by speaking with a researcher in the Ruins of Alph house.

The Sinnoh Pokédex resembles a Nintendo DS Lite. The touch screen feature in Diamond and Pearl may be used to scroll up and down the list of Pokémon.

The National Pokédex is the list of all existing Pokémon to date. Unlike the regional Pokédex, this one orders the Pokémon according to how they were released, following a more chronological order.

Pokémon Red, Pokémon Blue and Pokémon Yellow
There was no National Pokédex in Generation I games.

Pokémon Gold, Pokémon Silver and Pokémon Crystal
The Pokédex starts with the mode "Old Pokédex" since it is given.

Pokémon Ruby and Pokémon Sapphire
When a Pokémon that doesn't belong to the Hoenn Pokédex is traded into the games, it activates alone.

Pokémon FireRed and Pokémon LeafGreen
Professor Oak updates the Pokédex after beating the Champion and having at least 60 Pokémon registered in the Kanto Pokédex.

Pokémon Diamond, Pokémon Pearl and Pokémon Platinum
After having sighted all 150 Pokémon of Sinnoh (210 in Platinum), in Professor Rowan's Lab in Sandgem Town Professor Oak will appear and will update the Pokédex. After having met him in Pal Park, he will be found in his house in Eterna City and will be able to evaluate the National Pokédex.

Pokémon HeartGold and Pokémon SoulSilver
Before boarding the S.S. Aqua for the first time to Kanto, Professor Oak will show up to update the Pokédex.

Pokémon Black and Pokémon White
Professor Juniper will update the Pokédex in the player's house after defeating Ghetsis in N's Castle.

Pokémon Black 2 and Pokémon White 2
Professor Juniper will update the Pokédex in the player's house after defeating the Champion.

Pokémon X and Pokémon Y
Professor Sycamore will update the Pokédex in the Lumiose Station after defeating the Champion.

Pokémon Omega Ruby and Pokémon Alpha Sapphire
Professor Birch will update the Pokédex when talking to him after having fought Groudon/Kyogre.

Pokémon Brilliant Diamond and Shining Pearl
Professor Rowan will update the Pokédex when talking to him after having fought Dialga/Palkia.

In the anime, unlike in the games, the Pokédex does not start blank and fill after encountering and catching Pokémon. Instead, the Pokédex acts as a portable encyclopedic reference tool, able to give information about a certain species of Pokémon even if a Trainer has not seen or caught it. It can also give detailed descriptions of various Trainer tools, such as the Poké Flute. The Pokédex also acts as a form of identification, allowing trainers to partake in the various Pokémon League competitions. The Sinnoh Pokédex in the animé comes with a scanner that allows trainers to see what moves a Pokémon has, as demonstrated by Paul when he first met Ash and Brock.

A Pokédex in the anime also appears to have either a speech synthesizer or a method to play prerecorded sound. Although the Pokédex is not nicknamed in the original version, the Kanto, Johto, and second Kanto versions of the Pokédex are nicknamed "Dexter" and have a male voice; while the Hoenn and Sinnoh versions have a female voice and are nicknamed "Dextette". In the Pokémon Live! stage show, "Dextette" was also used as the name of "Dexter's" various assistants. "Dexter" is voiced by Nick Stellate (Season 1 [up to TB049]), Eric Stuart (Season 1-5, 8), Bill Rogers (Season 9) and Marc Thompson (Season 14-16) in the English adaptation, by Shin-ichiro Miki (Season 1-5, 8-9) and Unsho Ishizuka (Season 14-16) in the original, while "Dextette" is voiced by Rachael Lillis (Season 6-8), Michelle Knotz (Season 10-14) in the English adaptation and Megumi Hayashibara (Season 6-8), Tomoko Kawakami (Season 10-11 [up to DP101]) and Satsuki Yukino (Season 11-13) in the original, and by Kim Il (Original Series), Woo Jeong-shin (Season 6 part 1), Kim Seoyoung (Season 6 part 2), Seo Hyejeong (Season 7 episode 42), Chae Eui-jin (Seasons 7 and 8), Lee Yeong-ran (Season 9) Kim Hyeong-sim (Seasons 10 and 11), O Inseong (Seasons 12-13), Moon Nam-sook (Seasons 14-16), Yoo Sang-woo (Seasons 17-18), Kim Yeong-seon (Seasons 19-22), Kim Hyeong-ji, Jeong Joo-wan and Jang Ye-na (Season 23) in the Korean adaption. In the animé, the Pokédex comes in more than one color as May gets a yellow one when she gets to Kanto. Dawn, introduced in the Pokémon Diamond and Pearl season, gets a pink Pokédex when starting her Sinnoh journey while Paul, another new trainer and Ash's rival in Sinnoh, acquires a black one. Red remains the standard color, however.

The first Pokédex in one episode showed a small camera used to take a photo of the Pokémon and scan the creature's image to identify it. In the anime, the Pokédex looks like a Nintendo handheld system, mainly the Game Boy and DS.

Though the Pokédex functions exactly as it did in the anime in Pokémon Adventures, people view it far differently. Because unlike other iterations, the Pokédex was rare, being handed down only to certain individuals, all of them the manga's protagonists. This grants the protagonists a huge advantage over their enemies since they're the only ones who can learn their strengths and weaknesses. Due to the fact that they are heroes, the protagonists are labeled the Dex Holders, and are well-known throughout the regions due to their accomplishments.

Throughout the manga, all the versions of the Pokédex appear. Aside from that, Team Rocket in the Fifth Chapter stole data from Professor Oak to create the Dark Dex, which also allows users to see enemy HP, PP and stats.

Because of the popularity of Pokémon, the first model of Pokédex, corresponding to the Pokédex found in the first generation of Pokémon games, was manufactured by Tiger Electronics in 1999. It is a correct scale device which includes a small black and white LCD screen and contains information on 150 Pokémon. A slight error in the original version is that the Pokémon Pidgeot would not be identified by the 'Dex and could only be found via the Manual Search function. The device allows for password protection and featured a small keyboard to allow users to input information about their favorites or species they captured. It also has a digital calendar, a clock, and a basic calculator.

The second version, the Johto Pokédex, was manufactured in a gold color for the USA and European markets. The Japanese Version looks just like the one from the show.

In 2003, Hasbro offered an updated Pokédex which featured the 386 species of Pokémon that exist in the third generation. This device features multiple advancements along with a four-color greyscale screen with a higher resolution. This is modeled off of the Hoenn Pokédex.

In 2007, Jakks Pacific released the first talking Pokédex to speak the full names and types of all 386 Pokémon from the National Pokédex. This Pokédex is larger than the Hasbro model and features a blinking light to go with the speech. This is modeled off of the Kanto V2 Pokédex. 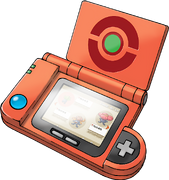 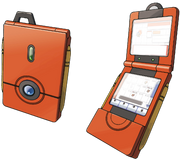