Poipole (ベベノム Bebenomu) (codenamed UB Adhesive) is a Poison-type Pokémon introduced in Generation VII. It is an Ultra Beast.

Poipole are emotional and one can gain the ability to understand human languages if it lives with humans for a long period.

Poipole evolves into Naganadel when leveled up after learning Dragon Pulse.

Its Japanese name, Bebenom is a combination word of the words bebe (a French name for baby) venom (another name for poison used by certain animals like reptiles and insects for most parts, which refers needle/pole-like shape on its head similar to bees and mosquitoes, and its dragonic-lineage which foreshadows its evolved form). 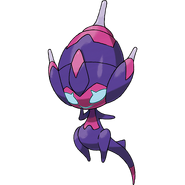 Add a photo to this gallery
← Marshadow | Poipole | Naganadel →
Retrieved from "https://pokemon.fandom.com/wiki/Poipole?oldid=1050866"
Community content is available under CC-BY-SA unless otherwise noted.