Poipole (ベベノム, Bebenomu) (codenamed UB Adhesive) is a Poison-type Pokémon introduced in Generation VII. It is one of the Ultra Beasts introduced in Pokémon Ultra Sun and Ultra Moon.

Poipole is a purple and dark pink alien-like creature with a big head. It has 3 lavender needle-like horns on its head and cyan eyes. Its mouth is small. It has small arms and its neck is extremely skinny. Poipole has stout, short legs with small feet and a very long tail.

Poipole are emotional and one can gain the ability to understand human languages if it lives with humans for a long period.

They can use their ooze to make paintings of Pokémon they like as a sign of friendship or express how they feel.

Poipole evolves into Naganadel when leveled up after learning Dragon Pulse.

Ash caught a Poipole in Love at First Twirl!, where it befriend his Pikachu. Ash later released Poipole so it can say in its homeworld. However, It later return in Z-Move Showdown! where it was revealed it had evolved into Naganadel and help Ash with the Ultra Beast crisis at the Manalo Conference

Poipole may be based on a stereotypical alien as they are often shown to be one or two shades of color, have oval-shaped eyes with no pupils and a giant head. Its ability to sting and deliver toxic liquids may be a reference to wasps or syringes. Its head also slightly represents a blooming flower bulb, possibly referencing sci-fi plants that are known to shoot acid from their bulbs.

Bebenomu comes from bébé (French for "baby") and venom. 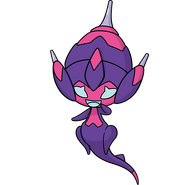