For the variant appearing in the games, see Plumeria.

Plumeria is a character from the Sun and Moon anime.

Plumeria is a young woman with golden-yellow eyes and pink hair with yellow highlights. She wears a black sleeveless tank top with an X pattern under it, black, baggy pants with white zigzag patterns, and grey sneakers. Plumeria also wears a black bracelet on her left arm, a grey locket with the Team Skull logo, and a pink Skull tattoo on her belly.

Much like the other members of Team Skull, Plumeria is a chaotic individual. However, she keeps the grunts in line, who refer to her as "Big Sis". She is quite concerned about Guzma and advises him to watch out for certain opponents, such as Ash Ketchum.

Plumeria was on Poni Island, tracking the status of Rapp, Tupp and Zipp, whom they referred to as their big sister. Plumeria was not pleased by their progress, and chided them. They admitted they wanted to catch some Oricorio for the base, but Plumeria cut the talk. She left, and the grunts followed her, escaping Hapu's wrath.[1]

Plumeria was in Team Skull's base, and announced their boss' return. The grunts lined up, cheering that their leader, Guzma, has returned. A moment later, Tupp, Rapp and Zipp arrived, and Plumeria scolded them for interfering. The trio reported that the Alola Pokémon League was in construction, which got Guzma's attention. The next day, Guzma, Plumeria and the three grunts went to Melemele Island, where they encountered Team Rocket. Hearing that the latter would participate in the Alola Pokémon League, Guzma swore to crush them. Plumeria volunteered to fight them in his stead, though Guzma wanted this to be a warm-up before his fight with Kukui. After Guzma defeated Team Rocket, the group went to the Pokémon School, where they called upon Professor Kukui.

The latter stopped, upon seeing Guzma. Plumeria announced the battle, but Ash decided to fight Guzma in Kukui's stead. After the battle was over, Plumeria invited Ash to join Team Skull, rather than to be around the loser, Kukui. Ash refused, so Team Skull went away back to their base. There, Plumeria was typing on her phone, while Guzma was planning how to destroy the Pokémon League.[2] Guzma trashed the place, and Plumeria was cleaning after him. She felt Guzma wouldn't have done this, if he had won a first place trophy, instead of second places ones. As she was cleaning up, Plumeria hurt herself a bit.[3]

Plumeria joined Guzma, who came to Manalo Stadium. The two saw their grunts being defeated at the hands of Ash and his friends. Plumeria yelled at them for leaving without even saying anything. The grunts wanted to help Guzma to crush the League, but Plumeria pointed out they have failed. Later, she joined Guzma at opening of the Alola Pokémon League.[4] Plumeria participated in the Alola Pokémon League with his Scizor. Before the Battle Royale began, Plumeria warned Guzma of the powerful trainer, Ilima, but Guzma lowered his head. During the Battle Royal, Plumeria stalked Ilima, who defeated a lot of their grunts. Plumeria sent Salazzle to harass Ilima's Eevee, who avoided her attacks and defeated her, but injured her own leg. While Plumeria lost in the preliminary round, she was still pleased that she accomplished what she had to do.[5]

Plumeria accompanied Guzma to the stadium. She stood at the sidelines with the Team Skull grunts, and grinned, upon seeing Guzma winning the battle against Lana.[6] Plumeria observed Ash and Kiawe training. Later, Guzma visited his subordinates, and proclaimed he'd destroy the entire league. Plumeria advised Guzma to be vary of Ash. Guzma simply claimed he was the unbeatable trainer, and as the grunts cheered for him, Plumeria was feeling down, since there was a reason why Guzma didn't suffer a single loss. Later, she and Guzma were watching Kiawe and Gladion's semi-finals battle.[7]

Guzma was annoyed by Gladion's victory and left, while Plumeria was concerned about him. They met up with Rapp, Tupp and Zipp, who were arguing about Ash and his friends, who would win in the semi-finals. Plumeria ordered them to drop the discussion, and noticed Guzma's strange behavior. As they walked away, Plumeria ordered the grunts to stop their cheering. She was watching the battle with the grunts. When Guzma started yelling to Golisopod about retreating into its Poké Ball, Plumeria was hoping Guzma calmed himself down to continue the battle.[3]

As Plumeria was watching the battle, she muttered "The undefeatable Guzma..." Tupp heard her, but Plumeria denied having said anything. She remarked that Guzma was the idol of Team Skull, a bunch of outcasts and misfits, whom Guzma gave a home to. She remarked even Guzma started to fear to lose this battle, as his grunts looked up to him. She remarked that Guzma was unbeatable because he chose the opponents he knew he could defeat. After Guzma lost the battle, Plumeria and the grunts went to him to cheer him up, being inspired by his battle. Guzma dismissed them, but Plumeria stated that she and others still wanted to follow in his footsteps. She promised to be by his side, to which Guzma jumped in happiness, as did his subordinates.[8] 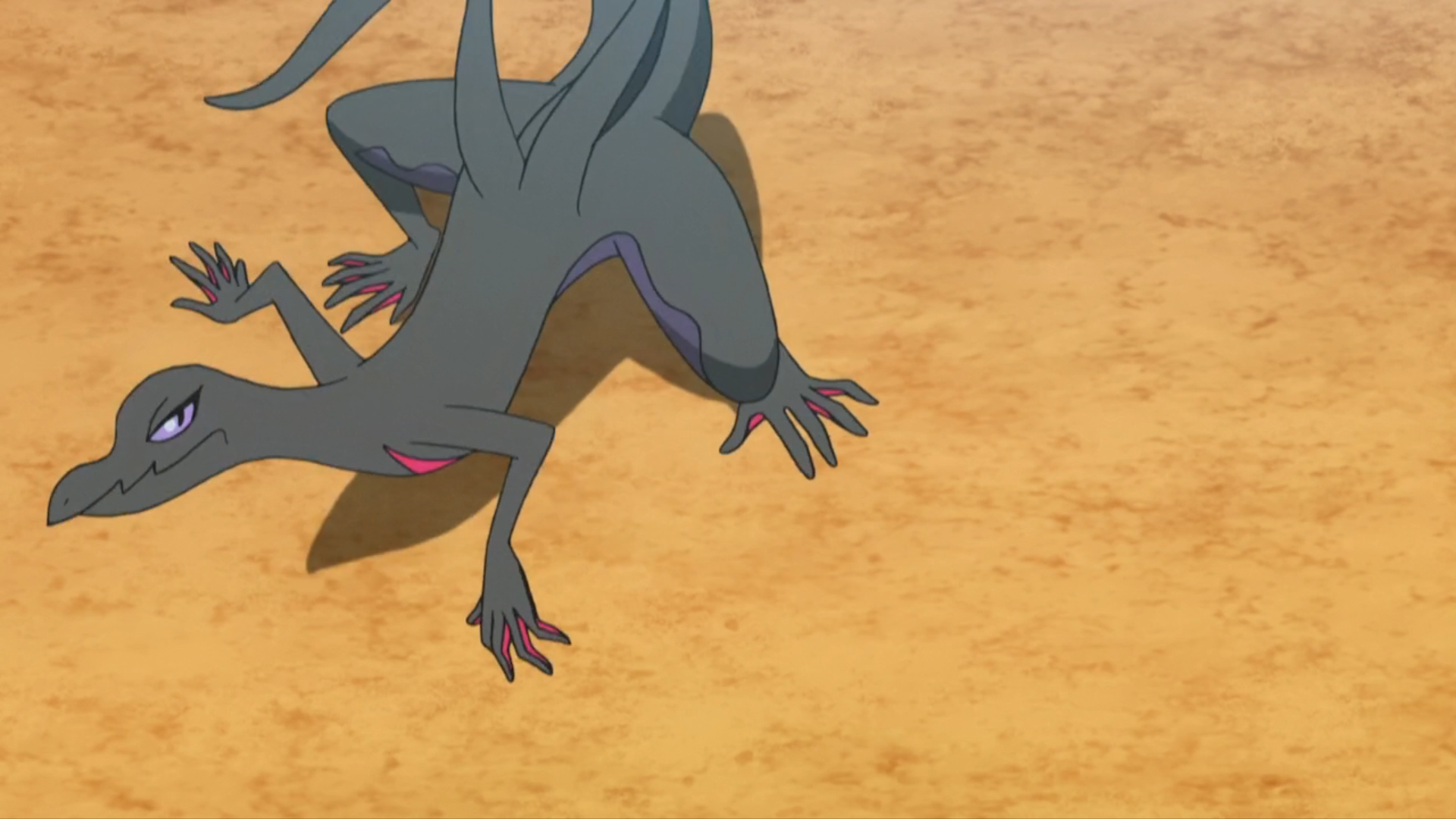 Retrieved from "https://pokemon.fandom.com/wiki/Plumeria_(anime)?oldid=1295516"
Community content is available under CC-BY-SA unless otherwise noted.