Plumeria is a character appears in Sun and Moon as the admin of Team Skull, and is an antagonist of the games.

Plumeria is a young woman with golden-yellow eyes and pink hair with yellow highlights. She wears a black sleeveless tank top with an X pattern under it, black, baggy pants with white zigzag patterns, and gray sneakers. Plumeria also wears a black bracelet on her left arm, a gray locket with the Team Skull logo, and a pink Skull tattoo on her belly.

After Team Skull is disbanded, her outfit changes: she wears a gray bandana with similar colors and patterns to Salazzle on her head, a watch on her right wrist, and matching pants to her bandana. She loses the Team Skull necklace, tattoo, and bracelet. Her white eyeshadow is also gone.

Her English and Japanese names, Plumeria and Purumeri respectively, both come from the "plumeria" flower. 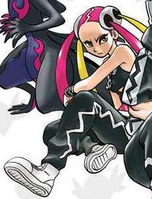 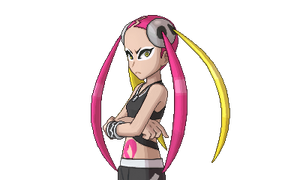 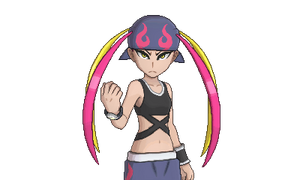 Plumeria's VS sprite during Champion title defense in Sun & Moon