Pincurchin are flat sea urchin Pokémon with spikes growing on its back. They have yellow eyes with black triangular pupils and 2 yellow orbs for a mouth.

Pincurchin uses its teeth to remove bits of seaweed, its primary food source, from rocks.

Its main ability is Lightning Rod which will draw in any electric Attack to boost its Special Attack. Its Hidden Ability, Electric Surge, sets up Electric Terrain the minute it enters battle like how Sand Stream Works for Tyranitar, preventing the sleep status condition and powering up electric moves.

Pincurchin's electric energy is housed in its spines, though it have alternative methods of storage as losing its spines allows to generate electricity for 3 hours.

Four of them were seen at the bottom of the lake Nessa was doing a photo shoot in.

Pincurchin is based on a sea urchin. It may specifically be based on the Varium Sea Urchin, also known as the Electric Urchin. Its English name also suggests that it may be based on a pincushion. It's mouth also resembles roe, a delicacy made up of fish eggs, referencing how urchin roe (or "uni") is sometimes eaten in Japan. Urchin roe specifically is also colored yellow or orange (the latter which is shown in its Shiny coloration).

Its Japanese name, Bachin'uni, is a combination of "bachin" (Japanese onomatopoeia of electricity sparkling) and "uni" (sea urchin). 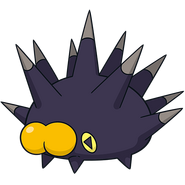 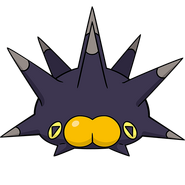