For the variant appearing in the games, see Pike Queen Lucy.

Queen of the Serpentine!

This section, or a part of it, has been transcluded from Pike Queen Lucy; any changes involving it should be made there instead. /

Lucy is tall, pale and very slender. She has bright red eyes and long straight black hair with red lowlights at the sides. She wears a purple halter neck crop top that shows off her stomach, long purple gloves, black pants with a gold diamond pattern around the waist, and pointy purple high heels on her feet. Her appearance is reminiscent of the Pokémon Seviper.

Lucy is a cold, calculated Frontier Brain, who makes precise movements in battle. Beneath her exterior, however, Lucy can be an emotional woman.

Scott described to Ash the Battle Frontier: Frontier Brains, like Lucy, were powerful Trainers, awaiting challengers in their facilities across Kanto region, which award Symbols upon being defeated.[1] Ash told his plan to challenge the Frontier Brains to Max and May, the latter thinking of accompanying Ash once more as she would challenge Pokémon Contests in Kanto region.[2]

Pike Queen Lucy arrived to calm down her sister and her two friends, who had come to show Ash the Battle Pike for his Frontier Brain battle with Lucy. Brock attempted to flirt with her, but Lucy's sister pulled her away, whreas Lucy found out that Ash was not there, having been lured into another trap by Team Rocket. When Ash escaped, Lucy personally confronted Team Rocket, pitting her own Seviper against Jessie's, which resulted in Jessie's Seviper being overpowered and Team Rocket being blasted off again. Afterwards, when Ash requested a battle, Lucy's sister reminded him that the Battle Pike is closed.

Brock continued to flirt with Lucy, who was blushing at his attempts, and told them that the Battle Pike was always open for good friends. With that, Ash's challenged was accepted, as a 2-on-2 battle. First off was Lucy's Seviper against Ash's Donphan: despite Seviper's agility and skill with dodging Donphan's attacks, it was outmaneuvered and knocked out, forcing Lucy to send out her Milotic, which was able to take out Donphan with one Hydro Pump. This forced Ash to send in his trusty partner, Pikachu. When none of Pikachu's attacks worked on Milotic, Pikachu turned its own Electric-type attacks on itself, strengthening it, and when Milotic used Twister, Pikachu used the tornado to knock out Milotic with Volt Tackle, earning Ash the Luck Symbol for defeating the Pike Queen.

After Ash and his friends leave for their next Fronter Brain, the leader of the Battle Palace, Spenser, Lucy returned home, revealing that her reasons for blushing whenever Brock flirted with her was due to how many of her Pokemon had similar eyes like Brock's, indicating that, for once, someone returned Brock's attempts at finding a pretty girl who liked him back.[3]

Lucy appeared in a flashback with her Milotic when Ash recalled his journey to earn every symbol from the Battle Frontier.[4] 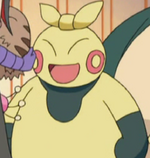 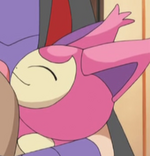