Pike Queen Lucy in other languages

Pike Queen Lucy is the fourth Frontier Brain of the Hoenn region. She is in charge of the Battle Pike.

Lucy is tall, pale and very slender. She has bright red eyes and long straight black hair with red lowlights at the sides. She wears a purple halter neck crop top that shows off her stomach, long purple gloves, black pants with a gold diamond pattern around the waist, and pointy purple high heels on her feet. Her appearance is reminiscent of the Pokémon Seviper.

Lucy is cold and straight-forward. She doesn't like stopping by to have chats and instead want to go straight into battles. She would also dismiss her opponents after a battle is over. Sometimes she can have a short fuse and is quite vain about herself. 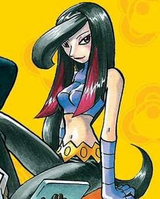