New Island
Pikachutwo was created by Mewtwo through cloning Ash's Pikachu's DNA and is the secondary antagonist of the first movie. He started fighting with Ash's Pikachu the minute he saw him, although Ash's Pikachu didn't like it. This happened at another time again; however, the two Pikachu became friends.

Pikachutwo differs from Ash's Pikachu with the slur in his voice and the black spiked patterns on its ears. This may have been caused by Ash disrupting the cloning process when Pikachu was being cloned.

After he was created, Pikachutwo attacked Ash's Pikachu, who didn't fight back. However, the battle came to a stop when Ash ran between Mewtwo's and Mew's attacks, which turned him to stone. Like all the other Pokémon, Pikachu felt utterly miserable about it.

However, the Pokémon's tears healed Ash. Mewtwo used his psychic abilities to lift Pikachutwo and the other clone Pokémon in the air, and they went away to find a safe home.

The clones had found a lovely place to live, at Johto's largest mountain at Mount Quena. Pikachutwo is seen with Meowthtwo, talking to Mewtwo. He was also seen saying no to Mewtwo right before Mewtwo's torture.

Pikachutwo miserable at not being a real Pokémon like Ash's Pikachu.

Pikachutwo and Ash's Pikachu being rescued by Ash.

Pikachu being slapped by Pikachutwo (2019 Remake) 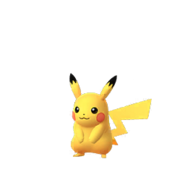 Pikachutwo's appearance in Pokémon GO
Add a photo to this gallery
Retrieved from "https://pokemon.fandom.com/wiki/Pikachutwo?oldid=1354390"
Community content is available under CC-BY-SA unless otherwise noted.