Pika in Pokémon Adventures, and colorized (in ordinary volume 1 and Collector's Edition volume 8).

Name
ピカ
Pika
Notes
Depending on the context, "の" may be the possessive, unless it is used in the name of a character, Pokémon, or fossil.

This Pikachu, nicknamed Pika, is an electric-type Pokémon owned by Red.

At Pewter City, in the 4th chapter of the RGB saga of the Pokémon Special series, it was eating the market's food products and everyone tried to catch it, with little success. Red decided to help them, so he sent out his Bulbasaur and, through its natural resistance against Electric attack, subdued the Pikachu, giving Red the opportunity to capture it. The people were grateful for Red saving their businesses, inviting him over for a meal as a reward. Red then showed them the Pokédex info about Pikachu, along with its Pokémon Red and Blue Sprite, saying it's the reason why he was on a journey. Through the Pokédex, Red saw that this Pikachu came from the Viridian Forest.

Pika was angry at Red, who forced him to battle Brock and his Rock Pokémon. However, Red was aware and asked Pika he didn't have to battle if he didn't want to. Pika saw some respect and defeated Brock's Pokémon. Red was pleased before getting shocked by Pika.

When Red disappeared, Pika was separated from him and was found by Yellow. Yellow decided to take care of Pika and it was able to befriend Yellow's Chuchu really well. Pika and Chuchu had an egg with each other and it hatched into Pibu. Yellow later gave Pika back when she found Red. 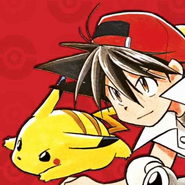 An old artwork of Red's Pikachu from Pokémon Adventures volume 1

Pika and Chuchu having an offspring/egg