Piers is the predecessor and older brother of the current Gym Leader Marnie and a user of dark-type Pokémon. He is also the boss of Team Yell.

Piers is a slim, tired-looking young man with pallid skin. His droopy eyes are cyan-colored and he wears blue-gray eyeshadow around them. He has angular black eyebrows. There are lines in between his eyes, which is probably due to the fact that he is constantly furrowing his eyebrows. He has long, spiky, black-and-white hair that covers one side of his face and is tied in three ponytails. His ponytail has an alternating striped pattern. He dons a black and magenta shorts jumpsuit with a cropped white jacket on top that has magenta diagonal stripes on the torso area and spikes on the wrist area. He wears a thumbless black glove on his right hand and is wearing a collar similar to his sister's, only with a gray band. He dons a metal wristband and a white glove on his left hand, and a belt with Poké Balls hanging from it. His shoes are gray with spikes pointing backward on the back of two bands around his shins. Under the shoes are black socks that might be connected to the bands but it is not confirmed. The heels of these shoes are a darker gray and shaped as skulls. The toes of the shoe are the same color.

Piers initially appears to be quite a glum and lethargic-looking person, seemingly keeping a dull expression and having a rather apathetic attitude towards most things. Due to his general lack of attention, Piers did not notice that his Gym trainers had formed Team Yell and went around Galar causing trouble for Gym Challengers. Piers is rather blunt, often calling out others on their flaws. Although Piers doesn't consider himself a good Gym Leader, multiple Trainers such as Raihan consider him to be among the strongest Trainers in all of Galar.

When he starts singing and during battles, however, he becomes more energetic and confident, sometimes to the point of announcing his battle strategies out loud. He frequently voices his distaste for Dynamaxing as he deems it to be dangerous and unnecessary, even going so far as to not Dynamax in the Champion Cup tournament and assisting in taking down the rampage of Dynamaxed Pokémon that Sordward and Shielbert caused.

Despite his gloomy exterior, Piers is actually a caring brother and a responsible person. Piers personally caught Marnie's signature Morpeko when she was younger and wished for her to take over the Spikemuth Gym. Once Piers learned of Team Yell's shenanigans, he took control of the group and had them use their talent for causing mischief in more helpful ways. He also assisted in stopping Sordward and Shielbert's schemes and personally took the job of watch over the siblings after they were defeated.

Spikemuth lacks a Power Spot that would allow Pokémon to Dynamax, and thus not many people come to visit the town. Piers feels responsible for allowing his town to fall into obscurity and dilapidation. Once in battle, Piers tends to get riled up and will often reveal his strategy early on, but he has the strength and skill to triumph regardless. However, his true passions are singing and song writing, and his talents in these fields are well-known. As such, he currently hopes that his younger sister will take over as Gym Leader, and sent out his Gym Trainers to safeguard her in the form of Team Yell. However, he is disheartened to learn that this took the form of interfering with other trainers' efforts.

Piers's name is likely derived from the word 'pierce', as piercings are popular in the punk rock style. 'Pierce' can also be used to describe a loud sound (such as "piercing music"), referring to his passion for singing. His name could also mean 'rock', which refers to the genre of music he sings.

His Japanese name likely comes from 'nezumi', Japanese for 'rat' or 'mouse', both of which are nocturnal creatures. It may also come from "nezu", the Japanese name for juniper.

Piers is the person who gave Marnie her Morpeko. He caught Morpeko when Marnie was five years old.

Despite being a Gym Leader, Piers did not attend the opening ceremony of the Gym Challenge. Piers is not seen until the player enters Spikemuth with Marnie's help, who was discouraged to hear that her fanbase had been sabotaging other Gym Challengers by preventing them from reaching him. When the player arrived at the concert, Piers immediately noticed them and remarked on how someone had finally come. The player beats him and he gives them the Dark Badge as proof of their victory.

Piers travels to Wyndon for the championship tournament, where he loses to fellow Gym Leader Raihan. After this, he decides to support the player character and Hop. After Leon gets held up by Rose, Piers has Team Yell help the Trainers make their way to Rose Tower.

Following the Trainer claiming the championship, Piers resigns as Spikemuth's Gym Leader, passing the title down to Marnie. He was in a mock battle with Milo when Sordward and Shielbert cause a Dynamax Pokémon rampage at the stadium. He aids the Trainer, Hop, and Milo in stopping the rampage. After this, he travels with Hop and the Trainer to stop rampages at the other gyms and to catch the villainous duo. With Sordward and Shielbert captured, Piers decides that he should be the person who keeps a close eye on them from then onward.

After completing both the base game's post-game story and the two DLC stories, Piers appears as participant in the Galarian Star Tournament. 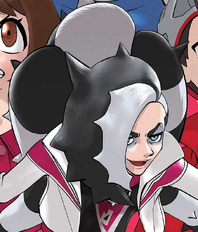 As an opponent, Piers can team up with Raihan, Opal and Marnie.