Pidove appears to be a small, gray pigeon with elliptical yellow eyes. It has two wide black stripes on both of its wings. It has a light gray belly, the lighter patch shaped like a heart. It has a tuft of three feathers atop its head.

Pidove are usually forgetful and unresponsive, but they are also loyal, smart, and love to be with humans. Pidove are not able to understand complex instructions during their training, and may soon forget the instructions the trainer just issued, and will stay in the place waiting for a new command. The impressive thing about Pidove is that they are usually obeying the trainers' instruction, as long as they understand it, and will deftly to complete. Pidove like humans and they often appear in places with a lot of humans to gather together and fly freely, which makes them good partners of humans.

Pidove evolves into Tranquill at level 21 and then into Unfezant at level 32.

Ash had a female Pidove. She evolved into a Tranquill later on in the anime when he help remove the Venipede from Castelia City. Then she evolved into an Unfezant during Ash's battle with Skyla and helped him won the gym badge.

Pidove is based on a pigeon.

Pidove's comes from the English words "pigeon" and "dove", both of which are very similar birds.

Its Japanese name may be a combination of 忠実 mame, diligent, and ハト hato, pigeon. 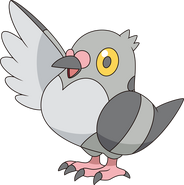 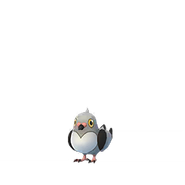