Pheromosa (フェローチェ Ferooche) (code named UB-02 Beauty) is a Bug/Fighting-type Pokémon introduced in Generation VII. It is one of the two entities with the UB-02 codename, the other being Buzzwole.

Pheromosa is a thin, white, feminine, cockroach-like Pokémon with gold fish shape mane. It has a long antennae that somewhat resemble the whiskers of fish. Its eyes are oval-shaped with purple irises and blue pupils. It has golden pads on its joints and yellow feet that resemble high heels.

Pheromosa is able to twitch its limbs at a speed of an estimated 120 miles per hour. It also produces a pheromone that causes those nearby to become awestruck at its presence.

Pheromosa is most likely based on an insect, specifically a cockroach. It is ironic that this Pokemon is based on a cockroach because they are usually regarded as dirty, ugly insects while Pheromosa is slender, beautiful, and hates anything unclean. It may also be based on a newly-molted roach nymph, which is white in color.

Pheromosa may incorporate "pheromone", "mimosa", a silky tree plant, and the suffix "-a" which is used in Spanish to represent a female. 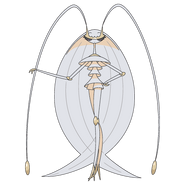 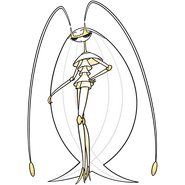 Add a photo to this gallery
← Buzzwole | Pheromosa | Xurkitree →
Retrieved from "https://pokemon.fandom.com/wiki/Pheromosa?oldid=1115495"
Community content is available under CC-BY-SA unless otherwise noted.