Phantump is a ghostly Pokémon that resembles a haunted tree stump. It has a large cylindrical head made of wood, with small twisted branches with tiny green leaves growing from either side. It has large, circular black eyes with red pupils and a tiny round mouth. Its body is a black wisp with two tiny stubby arms. It has a shadowy black wisp curling from the top of its small wooden head.

Phantump come into being when a spirit possesses a rotten tree stump. Legends say that Phantump are spirits of children who got lost in the deep forest and perished.

Phantump are shy Pokémon that prefer to live in abandoned forests.

Phantump evolves into Trevenant when traded.

Phantump is based on a haunted tree stump. It is also likely based on a Kodama, a spirit in Japanese mythology that takes the appearance of a tree. Its Shiny coloration may be based on birch trees and autumn leaves or the often white coloration of ghosts in media.

Phantump comes from phantom and stump. 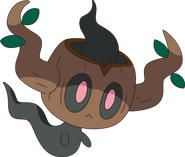 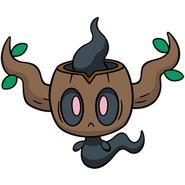 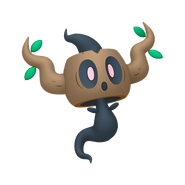