Petilil is a tiny plant Pokémon that appears to resemble a bulb. She has a mainly light green leafy body and a small white face surrounded by a hood-like formation of green petals or leaves. Three long bright green leaves sprout from the top of her head. She has small ovular brownish red eyes and no visible mouth. The underside of her body, just below her head, is short and green, with little stubby edges. She has a small collar of darker green leaves. She has tiny arms (as seen in the Pokémon musical).

The leaves on Petilili's head are bitter, but they can either revitalise a person who eats them or cause him/her to feel dizzy.

Petilil lives in places with nutritious and fertile soil.

Petilil evolves into Lilligant with the use of a Sun Stone. 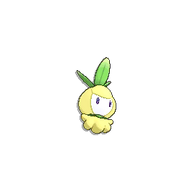 Petilil appears to be based on a tulip bulb.

Petilil’s English name seems to be a combination of “petal”, “petunia”, and “lily” or “little”.