Galarian Meowth evolves into Perrserker when it reaches Level 28, instead of Persian.

Perrserker resembles its pre-evolution, but its face has been changed dramatically. Its ears have become horns tipped with silver, similar to common depictions of a Viking's helmet. The gold coin on its head has faded to gray, while its face's fur has turned black, but its body has turned brown. It has 2 small horns on its head and 2 half-closed reddish eyes, with a menacing looking smile. It retains the beard from its pre-evolution. Its arms slightly covered in black armbands. Its claws can extend into daggers.

Perrserker are rowdy creatures who always desire to battle. The claws have become hardened after Perrserker have battled multiple times, and they always use their claws as daggers. They always look down on their counterpart Persian.

Perrserker is based on a cat and the stereotypical image of a Viking. While not evident in their typing, their Nordic inspiration may also draw upon the Norwegian forest cat, or fairy cats, whom were adopted as pets by the Vikings and were said to have pulled the sleigh of the Norse goddess Freya. Their behavior is similar to a berserker, which were Norse warriors who dressed in warrior skins and tried to drive themselves crazy before a battle, fighting like wild animals. Its large grin might have drawn inspiration from the Cheshire Cat who is notable for its teethed sinister smile. Perrserker's categorization as a Steel-type Pokémon could be a reference to Crucible steel, a metal that was commonly used by Vikings.

Perrserker comes from the words "purr" (the sound a cat makes), "persian" (a breed of cat known for its long hair and is also the name of the evolution of Kantonian and Alolan Meowth) and "berserker". 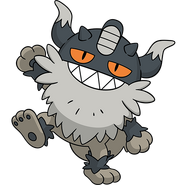 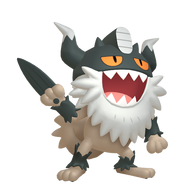 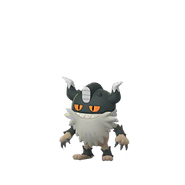