Patrat is a rodent-like Pokémon that resembles a chipmunk. It has mostly brown fur, with a tan-colored stomach and face. Its tail is long and straight with a scruffy white tip. It has a large pointed incisor tooth that sticks out of its mouth from its upper jaw. It has a black band circling its head and eyes, which appear to have red and yellow bands around its small black eyes (the rings are seen as being separate from the actual eyes when it is put to sleep). Its feet are small and black, with three toes on each foot.

Patrat live in large groups known as “mobs” (or, in some areas, “manors”). They dig complex networks of underground tunnels with many openings to the surface, allowing them to covertly travel nearly anywhere without being exposed to aboveground predators. Each opening of these network will always have a Patrat standing on guard, no matter what time it is. Guard Patrat are intensely alert, sometimes not blinking for minutes. In their attentiveness, however, most Patrat tend to ignore looking behind themselves, and thus are vulnerable to attacks from the rear. Their great peripheral vision makes them quick to notice foes coming from the sides, however.

Patrat will become anxious when even a single hole is left unguarded, and will refuse to leave their tunnels until an “all-clear” signal is given by every one of the guards. They wave their tails to communicate with others. They are able to store food in their cheek pouches to bring back to their nests; members of a mob will store their food communally in one large pile.

Patrat have sharp peripheral vision to help them notice their foes.

Their cheek pouches can help them deliver and store lots of food during a foraging.

Patrat evolves into Watchog at level 20.

Lenora owns a Patrat and was used against the gym match with Black.

Patrat appears similarly to a chipmunk. Its watchful nature may take inspiration from meerkats.

Patrat comes from patrol and rat. It may also come from packrat. 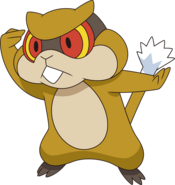 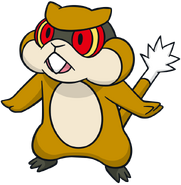 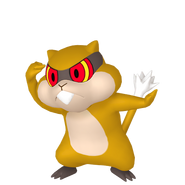 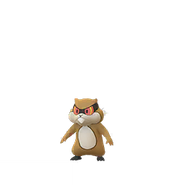