Passimian (ナゲツケサル, Nagetsukesaru) is a fighting-type Pokémon introduced in Generation VII. It is exclusive to Pokémon Sun.

Passimian is a black and white lemur-looking Pokémon with a muscularly burly build. Its muzzle, upper body, hands, feet, ankles and tail are black, while the rest of its body parts are white. It usually wears a pale green helmet with orange blaze and protruded green leaves, which partially obscures its eyes that have yellow sclerae and orange irises. There is always a vertical and horizontal leaf on its shoulders and chest, which are glued onto its body with its own saliva. It is mostly seen carrying a coconut-looking fruit.

Passimian dwell in troops of 20 to 30 individuals. They are led by a “boss” Passimian, who fashions an arm marking of leaves that all other Passimian in the troop will bear to distinguish themselves; the leaves are stuck on using dried saliva.

These Pokémon excel when it comes to teamwork. Bosses will select 10 of the fittest members to accompany them as they search for Berries; this is done on a case-by-case basis, so Passimian must constantly train themselves to stay in peak condition. Each Passimian in a team performs a particular assigned role when foraging. Bosses will also routinely conduct training exercises in which troop members must pass Berries to one another both quickly and accurately. The Passimian that can throw a Berry the farthest is the de facto leader. These sessions are often long and laborious; some Passimian even end up running away because they are unable to handle the pressure.

Passimian lob Berries at foes to defend themselves. They use soft ones to obscure their vision and hard ones to batter and bruise them. Troop members will never leave a comrade behind. Most bosses pass down special techniques from generation to generation. Domesticated Passimian watch their trainers closely as they throw their Poké Balls; they look down on those with poor form.

Passimian seems to be based on lemurs, most likely the sifaka, while also sharing traits with monkeys and baboons. It also incorporates themes of American football players.

Passimian comes from pass (as to pass a ball) and simian or prosimian (a group of primates that includes lemurs). 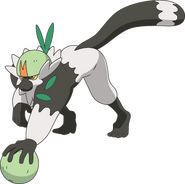 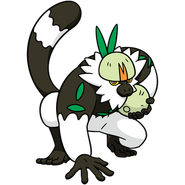 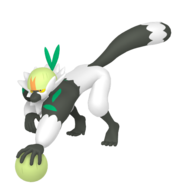 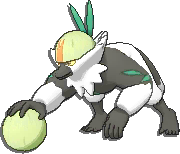 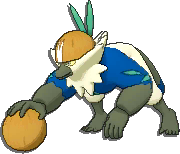