Pansear (Japanese: バオップ Baoppu) is a Generation V Fire-type Pokémon. It is one of three in the elemental Monkey Trio, alongside Pansage and Panpour.

Pansear is primarily red in color. The tuft of fur on its head grows into the shape of small fire, its hands and upper torso are a light tan coloration. Its lower body is also red, and has a matching red tail. Pansear's shiny variant turns the red fur into an brighter, more vibrant orange color.

Pansear do not only restrict themselves to active or dormant volcanoes; they can also be found on or near the calderas of extinct ones as well, despite their lack of magma. This ability makes extinct volcanoes "hot spots", so to speak, for Pansear colonies; as other species of Pokémon emigrate to new volcanoes once their current ones die out, Pansear in these areas can take over the abandoned territories and repopulate them. Pansear internally combust their food (mostly Berries) to provide themselves with energy. They are highly intelligent, capable of solving logic puzzles as fast as an average child. They mainly store heat in the tufts of fur on their heads, which can reach temperatures of up to 600 °F (300 °C). They often cook gathered Berries before consuming them, and are known to skewer them on twigs and roast them over their heads as they search for more food.

Pansear evolves into Simisear through the use of a Fire Stone.

Pansear is based on a monkey and a flame. Along with the other elemental monkeys, it seems to be based on the Three Wise Monkeys, with Pansear representing "hear no evil" by having a hand on its ear.

Pansear comes from Pan (the genus of Chimpanzees) and sear (to burn or scorch). 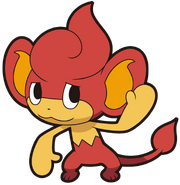 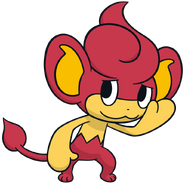 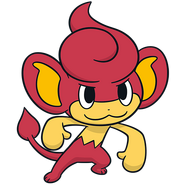 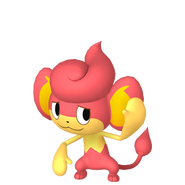 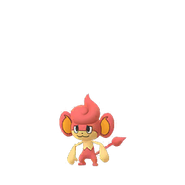