Pangoro is a huge panda-like Pokémon. It has gray and white fur and a large, fat belly. Its eyes are black and has a branch in its mouth and a furred cape. It has the same angry mood as that of Ursaring and Beartic.

Pangoro is one cantankerous, rambunctious Pokémon, but it loses its strength once the bamboo in its mouth is either destroyed or lost. Although that it may get mad easily, its strong heart and defensive to the weak nature is what shapes its personality greatly. To tell the truth, Pangoro is way more fond protecting the weak especially against menacing Dark-type Pokémon.

Pangoro uses its bamboo leaf to detect movement nearby. It boasts tremendous strength and can reduce a large truck to scrap with just a single punch. In the Galar region, Pangoro often have duels with Obstagoon.

Pangoro evolves from Pancham at level 32 when the player has a Dark-type Pokémon in their party.

Pangoro is based on a giant panda and a Japanese delinquent archetype, also known as a banchō. This is shown with its chewing stick and cape/jacket-like fur as well as its aggressive but protective behavior. It may also be based on the concept of bad influence as it only evolves (therefore gaining the dark type) if it is around dark type Pokémon, which are often labeled as evil or mischievous, therefore being influenced by them. Pangoro's Shiny coloration may reference the Qinling panda (a subspecies of giant panda with reddish-brown hair instead of black hair). 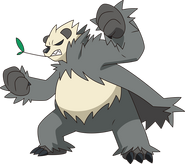 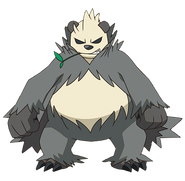 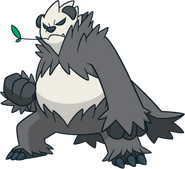 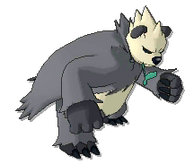 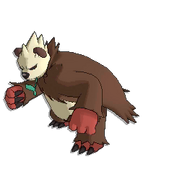