Palossand is a Pokémon based on a sand castle and just like Sandygast it too has a shovel sticking out on its head.

Palossand is known as the Beach Nightmare. It is able manipulate the surrounding sand to drag in victims in order to drain their life essence. Palossand makes its home on sandy beaches. However, it has a dislike for water and cannot maintain its sandy structure during rainy weather. The millions of sand that make up Palossand's body have their own will. After evolving, Palossand is able to use its ghostly abilities at a much stronger level. The bones of its victims are buried deep underneath it.

Pallossand's only ability is Water Compaction. Witch increases its defense by two stages if hit by a water-type move.

Palossand is based on a sand castle. Concerning its ghostly aspects, it may also be based on the concepts of graves and monuments for the dead or haunted castles. Its shiny coloring is a reference to the black sand beaches that are found in Hawaii.

Palossand is likely a combination of palace, colossal, and sand. It may also refer to the Palos Verdes Peninsula, a coastal area in California. It may also be a pun on pile of sand. 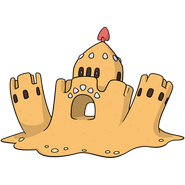 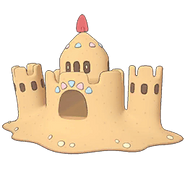