マサラタウン
Masara Taun
Pallet Town
Pallet Town is the first setting of the Pokémon Anime and video games. It is the hometown of the protagonist, Ash and his rival in the games and anime. The town's Pokémon lab is also where Professor Oak resides and studies Pokémon.

Pallet Town appears in Pokémon Red, Blue and Yellow with two houses, one Red's and one Blue's, and the Laboratory. The Japanese motto is "Pallet is the color of pure white beginnings." It is the smallest town in the game.

Many people come from Pallet Town, such as Ash, Red, Blue, Leaf, Chase, Elaine, Trace and Samuel Oak. There are only two routes linking Pallet Town to other places, which means that it doesn't have much commerce.

One of the routes (South Route 21) is a water route, so they get almost nothing coming in from there; the other is Route 1, the only place where they actually travel on, which is north.

The main trading city is Viridian City, where they get their supplies, as there is no Poké Mart or Pokémon Center in the town (although in the game, the player's mom heals his/her Pokémon). This is where all Pokémon trainers start out, as it is where Professor Oak gives out the Starter Pokémon.

The Rival's house has only one floor. Once, Professor Oak has given you the Pokédex, Daisy (the rival's sister) will give you the Town Map and also groom one of the player character's Pokémon.

Professor Oak lives and studies Pokémon in his lab. This is where Professor Oak will give the starter Pokémon - Bulbasaur, Charmander and Squirtle. On the occasion that Professor Oak is out of the previously listed Pokémon, he has been seen to hand out Pikachu and Eevee. This is also the location of the player's first battle, which is against their rival, BlueRBYFRLG or TracePE.

"Press START to open the MENU."

The main character from pokemon adventures 1-7, Red, teaches the local people about the world of pokemon and starts his journey here.

In the anime, Pallet Town is Ash and Gary's hometown. Professor Oak's lab is also in this town, and Ash deposits all his previous Pokémon (up to the ones he caught at Kalos) there.

When Ash Ketchum is done with his travels in a region, he and his Pikachu return back to Pallet Town to start a new adventure in a new region.

In "Pokémon Journeys" Goh and Chloe at a younger age went to Pallet Town to participate in Professor Oak's Summer Camp. 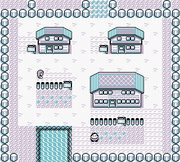 Pallet Town in Generation I

The player's house (Gen I) 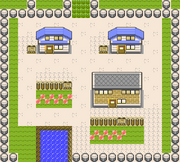 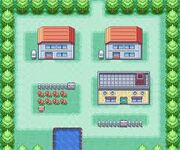 Pallet Town in "The Dream Continues!"

Pallet Town in the Anime

Ash home I Choose You !