Palkia (Japanese: パルキア Parukia) is a Water/Dragon-type Legendary Pokémon introduced in Generation IV. Palkia is the Version Mascot for Pokémon Pearl. It is Dialga's rival.

Palkia is a very large, bipedal Water/Dragon Pokémon. The majority of its body has a light pink-grey-white coloring with linear sections on its body being purple. Its arms and shoulders are covered by large armor plates, and each hand holds five nails. The round plates on its shoulders each have a large pearl in the center, representing its affiliation to Pokémon Pearl. On Palkia's back are wings, which are seemingly not used for flight as Palkia appears to levitate.

Palkia, along with Dialga and Giratina, was created by Arceus when it hatched from its egg. Palkia was tasked with creating space by Arceus.

Palkia has the ability Pressure, which causes opponents PP usage to be doubled for every successful hit. In addition to this, Palkia has been described as having the ability to warp space creating ways for it to live and travel in a different dimension. When Palkia appears in Pokémon Pearl, it bends space and changes the looks of things around it. This effect is similar to Giratina's effect in Pokémon Platinum. It is said that Palkia and Dialga were never supposed to meet.

Palkia does not evolve.

Palkia is described as a deity/god in Sinnoh-region creation mythology, and is said to live in a gap in a parallel spatial dimension. Referred to as the Spatial Pokémon, Palkia has the ability to distort space. Palkia also has the power to create new dimensions. In Rise of Darkrai, he was shown to be able to trap dimensions into another one. In Mystery Dungeon, Palkia is referred as a male.

After chasing and battling Team Galactic countless times through Mt. Coronet, the player ends up on the summit of the mountain, where lies a place known as Spear Pillar. When there, you see Cyrus, who uses the Red Chain he crafted from the powers of legendary Pokémon Uxie, Azelf, and Mesprit to call up and control Palkia, in order to change the world to Cyrus's liking. After defeating Cyrus, the Palkia seemingly awaits to battle the player. When the player battles is it, the player has the chance to catch the Palkia. If the Palkia is defeated before caught, there is another chance to encounter the Pokémon; after defeating the elite four and Cynthia.

Palkia is not encountered in Pokémon Diamond, but can be registered into the PokéDex, and/or traded from Pokémon Pearl.

Palkia, along with Dialga can be encountered both at level 70 after the player defeats the game. To encounter these two powerful Pokémon, the player must possess the Lustrous Orb for Palkia, and the Adamant Orb for Dialga. These items can be obtained from an old lady after beating the game. When the items are in possession, the player can go to Spear Pillar, where s/he can use the orbs to summon the legendaries for battle.

Explorers of Time and Darkness

You and your partner are having a good night sleep. Suddenly, the ground starts to shake. A blinding light appears for a split second, then clears, revealing Palkia. Palkia takes you to Spacial Rift and pushes you off a cliff of 40,000 ft. but you and your partner somehow survive the fall.

At the end you will face Palkia. Palkia is a nasty encounter if your a Fire type Pokémon. When you defeat him he will get trapped in nightmare (Exactly the same way Azurill does.). You enter it and as soon as Cresselia prepares to destroy you, another Cresselia (which the other is completely unaware of.) appears. You, your partner and Palkia look back and forth a few times, confused. Creselia 2 blasts light at the other one, revealing Darkrai underneath. After the final battle, Darkrai tries to escape. Fortunately, Palkia appears and shatters the dimensional hole while Darkrai was half way through as revenge for using him.

Palkia along with the chance of two other Pokémon, Dialga and Cresselia, will appear in the Spear Pillar stage. When Palkia appears on the stage, it will distort the level in a variety of ways. In addition, it will also fire a number of beams causing damage to hit players. Palkia will appear when the sky becomes purplish pink.

Palkia's first appearances were in the Diamond & Pearl series's Dragon Trilogy. It was first shown, along with Dialga and Darkrai, in The Rise of Darkrai, where it fought with Dialga and nearly destroyed Alamos Town. It was shown in a flashback in Giratina and the Sky Warrior, and finally, in Arceus and the Jewel of Life, alongside Dialga and Giratina, started a battle which awoke an ancient power. The Dragon Trio (Palkia, Dialga, and Giratina) seem to have equal power. Although Palkia fought Dialga in The Rise of Darkrai, they now seem to understand and accept each other, like when Palkia saved Dialga from the waterspout Arceus made, or when they fought alongside each other against Arceus.

Statues of Palkia have appeared in A Secret Sphere of Influence!, Journey to the Unown!, Losing Its Lustrous!, Double Team Turnover!, Steeling Peace of Mind!, Saving the World From Ruins!, and Bagged Then Tagged!. Palkia made its anime debut in The Battle Finale of Legend!, although a silhouette of Palkia appeared in All Dressed up with Somewhere to Go. This could possibly be the one from the dragon trio movies since there's only one Palkia in existence. Palkia also makes a cameo in the Together and Diamond and Pearl openings.

In the Pokémon Adventures Manga, Cyrus was controlling Palkia.

Palkia, along with Dialga, may be based on the Shinto legend of Izanami and Izanagi, who are said to have created one island with a spear, erected a pillar on it, and from there created the islands of Japan. Appearance-wise, Palkia is likely based after a European dragon combined with a pearl, being a water based precious stone. Its appearance may also be derived from the Plateosaurus or other bipedal dinosaurs such as the Oviraptor. How it is significant of the aspects of Space is shown through its Water typing, as it is the most similar medium which simulates both outer space and the metaphorical aspects of space, and whose consistency can manifest in various densities.

The name "Palkia" is partly derived from the word "Paru", meaning pearl in Japanese. Since the Japanese language possesses only one liquid consonant, which is the equivalent of the English language /l/ and /r/, the "r" in paru can be used as an "l", creating Palkia when romanized. 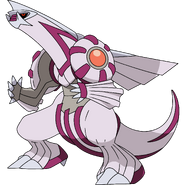 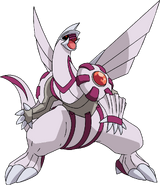 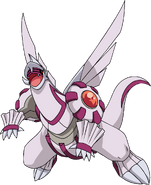 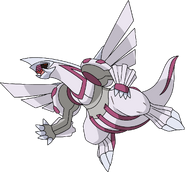 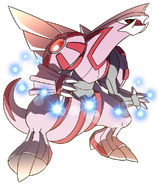