Pachirisu is a squirrel-like Pokémon. Its fur is white with a faint blueish tint and it has a light blue stripe which originates at its forehead and extends to the tip of its tail. A large white tooth grows out of its mouth, and its eyes are a deep gray. Its cheeks and eyes are similar to that of a Pikachu, but yellow instead of red. Pachirisu have tails almost twice as big as themselves, with three spikes around the middle. Their arms and legs are very short, but the can still run incredibly fast, a trait usually associated with Electric-types.

Pachirisu are active Pokémon, generally hyper active during the day. When they sleep, Pachirisu like to curl their massive, fluffy tails round to the front of their bodies and use them as a pillow. They also like to chase and groom their tails. When a Pachirisu sheds its fur it shapes it into fur balls. These fur balls exhibit static. Pachirisu hides its favorite foods in these static puffs and stores them in tree holes. It does this to protect the food—if a humans or other Pokémon try to take the food, they will get shocked from the static.

Pachirisu are generally found in tree tops in forests, as well as the outskirts of forests and near Power Plants.

Pachirisu is known to eat mainly berries. Its diet is similar to that of Pikachu.

Pachirisu are generally weak at battling, but are good, defensive Pokémon with average Defense and Sp. Defense stats and great Speed.

Dawn has a Pachirisu which she caught in "Twice Smitten, Once Shy". Dawn finds and is attracted by a wild Pachirisu, which hugged its large tail, making it look very adorable. Then Dawn catches Pachirisu. During this episode, Pachirisu used Discharge in Dawn's tent, making Dawn's hair stick up. When Dawn attempted to train Pachirisu, Pachirisu was having fun and refused to obey her commands. When Dawn wanted to return Pachirsu to its Poké Ball, Pachirisu avoided the red beam over and over again. Then Ash, Brock and Dawn used all their Pokémon to chase down Pachirisu. But Pachirisu ran off quickly and was difficult to stop. In the end, Pachirisu was surrounded by a huge cliff with no way out. It used Discharge and made all the Pokémon faint. Then Pachirisu fainted due to tiredness.

Dawn then released Pachirisu back to the wild, and Jessie caught Pachirisu. However, Pachirisu used Discharge to destroy Team Rocket's balloon before it returned to Dawn. Dawn then re-captured it, and it became her new companion.

Pachirisu was trapped in a Hippowdon in a land full of sand and the gang attempted to rescue it, disturbed by Team Rocket members, Cassidy and Butch.

In the Pokémon Ranger Batonnage Manga, both Hajime and Hitomi use a Pachirisu as partner. 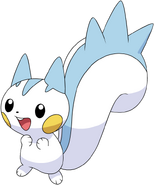 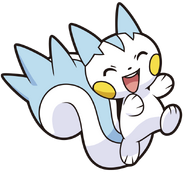 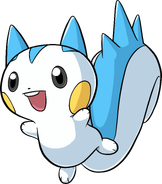 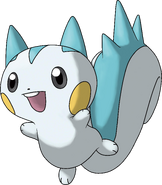 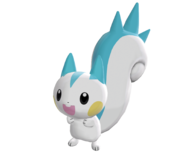 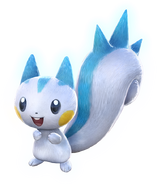