Eevee & Friends (Japanese: ピカチュウとイーブイフレンズ Pikachu and Eevee Friends) is the Pikachu short that debuted a few months after the 16th movie.

Pikachu, Oshawott, Pansage and Axew are playing in tall grass. They then fall down a hill, and they hear a voice. The group splits up and tries to find the Pokémon. Pikachu briefly sees it a few times, but can't locate it. Then, something covers his eyes. Pikachu turns around and meets Sylveon, the new Eevee evolution. Oshawott, Axew and Pansage arrive, and as usual, Oshawott falls in love with Sylveon. The Pokémon then leads her new friends to the Eevee House, her home - they are having a party and a sleepover that very day. Eevee is called for and slides down a grassy terrain, but falls on top of Axew. Sylveon helps the two up, and Eevee is introduced to the others.

As Oshawott finishes greeting Eevee, he is electrocuted by a Jolteon who runs out and hugs him. Sylveon takes off Jolteon, only to leave a fainted Oshawott. Eevee, Axew and Jolteon play tag and run inside the Eevee House. Oshawott is left behind, stunned. Then, when he recovers, he running after them. Knowing he will cause trouble, Pikachu, Sylveon and Pansage run after him. The playing Pokémon enter Glaceon's room, with ice shards to jump over. They play in the sculpture, while Oshawott breaks through the ice instead of hopping on it. Glaceon, seeing this, becomes mad and uses her Ice Shard on Oshawott.

Oshawott, frozen, falls out of the room and makes a perfect item for Eevee, Jolteon and Axew to land on as they exit. He breaks out of the ice and, as usual, goes on the wild goose chase. Next, the three hop around Leafeon's room, a tent-like home hanging from a vine. Oshawott gets stuck in some vines and swings the entire nest around, making everyone dizzy. Leafeon, angry, uses her Magical Leaf, making Oshawott appear as a leafy shrub.

Pikachu and friends later meet the mysterious Umbreon, shy Flareon, vain Espeon and playful Vaporeon, and come together for a party with a feast prepared by Meowth and Wobbuffet. It soon turns into a talent show where all the Pokémon perform for everyone else, but Glaceon and Leafeon are not impressed by Meowth and Wobbuffet's impressions of them and they get blasted off. Sylveon wonders where Umbreon is. He eventually arrives to the party and uses Psychic to levitate some watermelons before running off, so Pikachu and the others decide to follow him to a rocky cliff where Umbreon and his friends Weavile, Gible, Gothita, Gothorita and Gothitelle are waiting. When Meowth returns with Wobbuffet after the blast-off, he assumes that Pikachu and the others are in a standoff with Umbreon and starts attacking, so Sylveon blasts them off for a second time.

Umbreon and his friends, with help from Sylveon, create a cosmic show that delights Pikachu and the others - it is revealed that this was Umbreon's surprise present for the others. Meowth and Wobbuffet then realize that Umbreon's friends aren't so bad after all. The other Eeveelutions also assist in the show, making it extra special.

Afterwards, Meowth apologizes to Umbreon and his friends for thinking they were up to no good, then all the Pokémon enjoy another feast as Meowth's way of making amends. As the day ends, they fall asleep together in one big room, Pikachu and Sylveon giving each other a smile before falling asleep. Jolteon gives an unconscious shock to Oshawott, who is sleeping nearby.

The next day, all the Pokémon continue to play together over the credits. 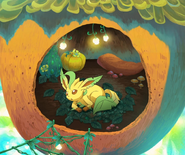 Add a photo to this gallery
Retrieved from "https://pokemon.fandom.com/wiki/PK026:_Eevee_%26_Friends?oldid=1306073"
Community content is available under CC-BY-SA unless otherwise noted.