Pikachu's PikaBoo is the fourth animated short for the movie Pokémon 4Ever.

Pikachu and friends plays at a beach. Pikachu and Togepi run into the water as the tide recedes and run away when the tide comes in. Totodile is having fun in the shallow water, kicking it around. Psyduck is floating in an inner tube before a huge wave knocks it out of the water. Meanwhile, Bayleef and Cyndaquil are having a nice rest in a shady spot near the beach. That is, until Totodile uses Water Gun to wake up Cyndaquil. Cyndaquil then begins playfully chasing after Totodile.

Four Corsola walk by and an interested Togepi follows after them and into the ocean. Pikachu saw Togepi sinks into the water and raced over to try and help it. Luckily for Pikachu, a Wailmer was there. It lifted Togepi on its back and shot it into the air. A Yanma flew by, catching Togepi on its back, and set it back down on dry land. Once Yanma flew away, the gang chased after it, seeing a mansion as they did.

At the mansion, a Larvitar, Kecleon, and Granbull are all making sure that the mansion and garden are clean and safe. Larvitar first spots a chair that it leaning over and tells Granbull to fix it. Then it spots a rock that has fallen off a plant holder, which it fixes itself. Just then, the gang shows up. Togepi follows a few Sunkern, bouncing up and down with them. However, Togepi lost its balance, and knocked over the rock Larvitar just fixed. Larvitar looked angrily at Togepi, but Pikachu was right there to defend it. Unlike Larvitar, Granbull and Kecleon seemed happy to find new friends. Granbull called out to the Pokémon in the garden. Sunflora, Oddish, Sandshrew, Azurill, and Donphan came running over, introducing themselves to the gang.

When Pikachu tried to get Larvitar to come over, Larvitar walked off in a huff. Pikachu, although distraught, decided it would be fun to play a game of hide n' seek. The other Pokémon happily joined in. Pikachu picked up a small stick with a leaf hanging on one side and tossed it into the air. As the Pokémon tried to blow the stick away from themselves, the song Pikachu's Coming started to play in the background. Finally, the leaf fell and landed toward Pikachu.

Pikachu was 'it' and ran to count. All of the other Pokémon ran to hide, all but Togepi who wanted to count with Pikachu. However, Bulbasaur picked Togepi up with its vines and ran off.

The first one to hide was Oddish, who dug a hole in the ground and hid so that only its leaves were showing. Bulbasaur ran by Azurill and set down Togepi. Granbull and Cyndaquil ran past, so Togepi decided to follow after Cyndaquil.

Meanwhile, Sunflora was trying to find a place to hide. It hid in the wrong types of flowers, making Sandshrew laugh. It hid in another type of flower, but that was wrong, too, so Kecleon laughed. Kecleon was then seen hiding behind a small column and turning itself invisible. Bulbasaur was shown under the ground.

Totodile was dancing along a few platforms, and Donphan desperately trying to find a good place to hide. Granbull, Togepi, Cyndaquil, Psyduck, and Azurill were seen running toward a flight of stairs and then straight up them. They then came to another flight of stairs that only Granbull and Cyndaquil ran up. Togepi and Psyduck went off to the left and Azurill ran off to the right.

Togepi was seen in a small room near a couch. It looked out the window and waved 'hi' to the Yanma. Cyndaquil and Granbull were in a hallway. Azurill ran across a small platform with a goofy grin on its face. Psyduck tried to squeeze its head in a small space in what seemed to be a kitchen, but it was to no avail. It tried once again to place its head between a counter and refrigerator, but it was still no good. Then Cyndaquil and Granbull are shown in a sort of living room. Cyndaquil found a small space it was able to fit in; however, Granbull tried to also fit in, causing Cyndaquil to run away.

Granbull is shown having a hard time trying to fit into the tight space. It then used its cheeks to push the dresser and make the space larger so it was able to fit. Azurill is seen outside in a small pond-like enclosure, hiding under the water. Finally, Psyduck is seen struggling to fit into a small space.

As soon as Pikachu is finished the counting, the song ends and Pikachu runs off down a small flight of stone stairs. Larvitar is seen from the corner of the screen, looking angrily at Pikachu. It picks up the stick Pikachu had thrown into the air and observes it.

Pikachu is then searching for the other Pokémon, looking through the garden. Pikachu makes it to the sunflower section and walks in, looking for the Pokémon. It then notices Sunflora and decides to trick it by turning away. Once Sunflora turns to look at Pikachu, Pikachu looks back at it and catches it, making Sunflora the first Pokémon out. Pikachu then walks through what seems like a maze and sees something unusual about the end of one wall. Once the wall fidgets around, Pikachu founds out that it's really Sandshrew. Sandshrew is the next Pokémon out.

Pikachu makes its way toward a fountain and looks around it, noticing a miniature fountain that isn't supposed to be there. Pikachu holds its breath and looks under the water. A Chinchou swam by and toward Totodile who was making the water fly into the air. Pikachu took its head out from under the water and ran over to be closer to Totodile. It then stopped the water and tickling Totodile's nose and making it come out. Totodile was the next Pokémon out.

Pikachu walked by and Larvitar hid behind Donphan. It then got the idea to push Donphan, so it pushed the Donphan down the cliff and at Pikachu. Pikachu was able to escape the Donphan, however, Donphan wasn't so lucky and fell straight into a bush. Sadly, Donphan knew it was the fourth Pokémon out.

Pikachu then took a look inside of the mansion. It decided to head toward the living room first and saw Togepi on the couch, hiding in its shell. Pikachu tickled Togepi, getting it to come out. Togepi was the fifth Pokémon out. But unlike the other Pokémon who Pikachu found, Togepi was happy to be found by Pikachu and gave it a big hug. Togepi then followed Pikachu around as Pikachu came to a small fireplace. Pikachu took one look and saw the blue fur of a Cyndaquil who was using its flame to act the fireplace was only lit. Pikachu and Togepi called it out and Cyndaquil was the sixth Pokémon out.

The lawnmower chased Pikachu, Totodile, Cynaquil, and Togepi down a hill. Oddish popped out from under the ground and turned to see the lawnmower. It, too, took off. Pikachu was the first to stand and fight, using Thunderbolt. The lawnmower was unfazed, because it's electricity-proof and simply brought out its chainsaws like a robot. Next, Totodile tried to fight it with a Water Gun, but that didn't slow the lawnmower down because it's water-proof. Afterwards, Cyndaquil tried to use Flamethrower, but somehow the lawnmower moved out of the way. Cyndaquil chased it with Flamethower, but the lawnmower jumped over each one until it landed behind Cyndaquil.

The lawnmower got stuck there and the gang walked off. Once out of the maze, the gang thought they were safe. However, the lawnmower got out new equipment and tore through the maze, once again chasing after the gang. They ran toward a flower pot and a tree with a swing attached. Granbull jumped onto the flower pot, whereas Pikachu, Togepi, Cyndaquil, Totodile, and Larvitar ran up the tree. The lawnmower used its circular saws to cut down the tree and continue chasing after the gang. The only ones left behind were Granbull, Totodile, and Cyndaquil.

However, the lawnmower came out of the water and continued its chase. Meanwhile, the commotion woke Bayleef up.

Finally, Larvitar had an idea and called the Pokémon to its side. The lawnmower chased after Pikachu and Togepi as Larvitar and the others put logs down to keep the lawnmower on a track. Larvitar called Pikachu over and Pikachu was able to get the lawnmower to chase it up the track the Pokémon had made. It was all going smoothly until Psyduck ran over with one of the logs and tripped. The log flew at the lawnmower and knocked it off course and at Psyduck.

Meanwhile, Kecleon was still hiding behind the column. It turned itself visible again and looked around, confused as to why Pikachu hadn't found it yet. The Pokémon cleans up the garden after the lawnmower wrecked it.

Meowth and Wobbuffet are seen getting out of the chimney. Finally, after a long day, Larvitar decided to join in a game of hide n' seek. When it threw the stick into the air, the leaf fell off, so all of the Pokémon started to blow on the leaf. The leaf finally landed and pointed to Larvitar. Larvitar took it well and began to count. Togepi, again, tried to count as well, but Pikachu took Togepi away. The camera pans out to show the sunset sky and the ocean. 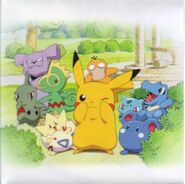 Add a photo to this gallery
Retrieved from "https://pokemon.fandom.com/wiki/PK011:_Pikachu%27s_PikaBoo?oldid=1099845"
Community content is available under CC-BY-SA unless otherwise noted.