Pokémon Wiki
Register
Don't have an account?
Sign In
Advertisement
in: Pokémon Journeys: The Series episodes, Episodes in which a Mythical Pokémon appears, Episodes focusing on Pikachu

A Chegada de Pikachu!
(The Arrival of Pikachu!)
Airdate(s)

Pokémon belonging to Trainers in flashbacks

It is revealed how Ash's Pikachu evolved from Pichu prior to his journey with Ash four years ago.
Goh encounters Mew for the first time.

For other title cards, see here
Enter Pikachu! (ピカチュウ！, Pikachu Tanjou!, Pikachu is Born!) is the 1st episode of Pokémon Journeys: The Series.

Four years ago in one of the forests of Kanto, Ash's Pikachu was a lonely Pichu. He has a certain encounter and farewell that makes him what he is today.

The young Ash rushes downstairs to show his mom a poster advertising Professor Oak's Pokémon camp. Seeing her son's enthusiasm, Delia agrees to sign him up right away but warns him that he will have to go to Oak's lab alone as she has other things to do on that day. Ash is too distracted to listen to this because of his excitement.

Meanwhile, in the forested outskirts of Pallet Town, a young Pichu observes his surrounds. A group of Butterfree surrounds Pichu, causing him to twirl in excitement. Suddenly, an Ekans launches forward. To defend himself from the predator, Pichu delivers a Thunder Shock. Ekans slithers back to its burrow to recover from the shock, while the electrical discharge leaves Pichu exhausted.

Pichu quickly recovers, and notices that he is all alone, unlike all the other wild Pokémon. As he contemplates his situation, a group of Koffing float by and unleashes a horrible smelling gas. The bad smell causes Pichu to become disorientated, and fall over a cliff. After crashing through a tree, a Kangaskhan manages to catch Pichu from his fall. Pichu is initially frightened by the large Kangaskhan mother, but quickly befriends her and her child. As the Kangaskhan herd prepare to leave, the mother places Pichu in her pouch. The herd stops at some Oran Berry trees for a feed, with both the Kangaskhan baby and Pichu each getting a whole Berry to enjoy. Having finally found a place where he is taken care of, Pichu continues to live with the Kangaskhan family.

Several weeks later, the day of Professor Oak's camp has arrived. While many of the attendees including Chloe and her friend, Goh have arrived on time, Ash is still sleeping. Goh and Chloe are eager to begin their field trip, so Professor Oak decides to set off and stop waiting for Ash. Ash eventually wakes up, and in a panic, he rushes out of home still wearing his pajamas. During the forest excursion, the kids and Oak observe a young Trainer catching herself a Caterpie. During the day, Goh continues to showcase his Pokémon knowledge, identifying every Pokémon in sight and reciting facts about them. While the other kids are impressed, Chloe tells Goh to allow Professor Oak to do the talking instead. However, Goh continues to show off his knowledge of Pokémon. Even correcting Oak on his statement that all Pokémon evolve.

While Oak leads the group over a bridge, Goh and Chloe lag behind. Chloe tells Goh that he should focus on making friends instead, but Goh insists that he wants to find a rare and never-before-seen Pokémon. Chloe dismisses Goh's ambition as a dream, but Goh asserts that it is the future. The cry of a Nidoking attracts their attention, and Goh is surprised by Nidoking's opponent, a Mew. Nidoking uses Earth Power, but Mew simply Teleports to evade. Mew replies with the same move, which easily hits the Nidoking. As Nidoking attempts a Sludge Wave, Mew Teleports away again before retaliating with the same move once again. Nidoking becomes frustrated and launches a Fire Blast at his shifty opponent, though Mew again evades and then proceeds to defeat Nidoking with its own Fire Blast. Chloe and Goh are impressed by the mysterious Pokémon, and they chase it as it flies away. In their search, the pair comes across a Magmar, though Mew quickly Transforms to its regular form to reveal itself. Mew leaves yet again with Goh and Chloe in a hunt, transforming into a Tauros to run across the land before changing into a Lapras to travel downstream on the river.

Elsewhere, Pichu continues to enjoy his time with the Kangaskhan family. He plays a game of hide-and-seek but is quickly spotted by the Kangaskhan baby, ending the round. While searching for Pichu again, the young Kangaskhan spots a Lapras as it cruises down the river. Lapras reveals itself to be Mew, who quickly takes interest in the Kangaskhan baby. Mew overhears Goh and Chloe's voices and flies away. But the Kangaskhan baby climbs over the ledges to follow its mysterious encounter. Meanwhile, the Kangaskhan mothers call their babies out for a Chansey egg meal. Pichu and the Kangaskhan mother soon notice the infant's absence and begin to search for it. The search party makes their way over to the stream, where they overhear the young Kangaskhan's cry. While chasing after Mew, the ledge, unfortunately, broke apart underneath Kangaskhan, sending it hurtling towards the water below. Chloe and Goh stop as they hear the young ones screams. Mew turns back and promptly uses Psychic to save the Kangaskhan baby from harm, and returning her to her mother's arms. With the family reunited, Mew soars away. Afterward, Professor Oak rushes towards the two kids, relieved that they have finally found them. While returning to the rest of the group, Oak thinks that they've encountered a Mew, a Mythical Pokémon speculated to contain the genes of all Pokémon. Hearing this, Goh sets his sights on catching Mew one day. Ash, meanwhile, sits on his bed at home, having missed the camp entirely.

Some time passes, with both Pichu and the Kangaskhan baby having grown a lot. The Kangaskhan herd seeks shelter from a rainstorm in a cave. While the Kangaskhan are fast asleep, Pichu leaves his adoptive mother's pouch. He takes a moment to observe his family as they sleep, and ventures outside with a tear in his eye. Grateful for their kindness and company, Pichu suddenly evolves into a Pikachu. Looking in a nearby puddle, Pikachu is initially startled by his unfamiliar reflection before twirling around in excitement. Pikachu waves goodbye to his family before leaving under the cover of nightfall.

Years later, Professor Oak gives this very Pikachu to Ash Ketchum, an aspiring young Trainer. Pikachu, however, isn't too thrilled by his new master's enthusiasm and replies with an angry Thunder Shock. However, as time passes, Ash and Pikachu continue to become a formidable and inseparable duo with an unbreakable friendship. 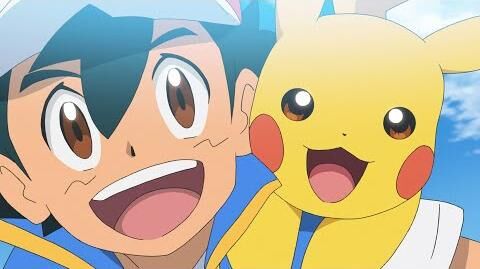 Ash showing the poster for the Pokémon camp

Delia reminding Ash, that he will be alone on the day of the camp

Pichu getting befriended by the Kangaskhan family

Pichu and the Kangaskhan baby in its mom's pouch

Pichu playing with the Kangaskhan baby

Goh and Chloe at the Pokémon Camp

Goh shows how talented and informed he is about Pokémon

Mew playing with the Kangaskhan baby (or the other way around)

Mew gets spotted by Goh and Chloe

The Kangaskhan family getting reunited

Ash being sad because he overslept, despite being warned by his mom

Pichu remembering all the fun he had

Ash getting Pikachu from Professor Oak

Chloe with her friends

A mysterious ending with Goh, "It's my reality, my future, and I can hold that future in the palm of my hand!"