Overqwil is a large, spherical Pokémon that resides in the sea. All over its body are overgrown conical spikes whose colors correspond to those on Overqwil's body. Its top half is a black color while its bottom half is light yellow. In the middle of its body, the two colors create a pattern. The spikes on the top half of its body have parts of purple at their tips and there are two very long spikes at the top and bottom of its body that jut out in a straight direction. Above its eyes and around part of the top half of its body, Overqwil has circular purple dots. Its lips also have a purple coloration and appear puffy, and its small light-yellow eyes have purple pupils and are always fixated in an annoyed expression. In between its eyes are two pairs of spikes, the outer ones being longer and resembling eyebrows. Its large tail appears flat with a black outline and a purple inside, which also has a pattern that resembles the letter "Q."

These unwelcoming Pokémon are detested by almost anyone who interacts with the sea. Known as 'sea fiends', Overqwil are irritable at best and frequently bully another Pokémon away wherever they swim. In addition to essentially being floating balls of spikes that pierce anything that gets too close, Overqwil venom is even more virulent than that of Hisuian Qwilfish and can leave adult swimmers completely paralyzed within seconds. To make matters worse, though they cannot inflate or launch their spikes, Hisuian Qwilfish can spray venom from their spines and jet it through the water. Though it is not nearly as effective upon surface contact, it is quickly taken in by gill-breathing Pokémon.

Because of these traits, Hisuians on the region's coasts went to great lengths to keep the Pokémon at bay. In some settlements, fishermen even developed elaborate ceremonies, often steeped in superstition, to keep Overqwil from terrorizing their waters. When two Overqwil meet, it is a nasty sight; the ensuing battle leaves the surrounding sea filled with venom, rendered uninhabitable until it dissipates.

Overqwil's venom can leave their victims completely paralyzed upon contact, and it can also be spread across and contaminate the ocean.

Overqwil evolves from Hisuian Qwilfish that has used Barb Barrage in Strong Style for twenty times.

Overqwil is based on a pufferfish and their ability to puff up when threatening, showing spines covering their bodies. Its Poison type may be a reference to how some pufferfish have toxins that have no antidote. It may also reference how pufferfish are a common delicacy in Japan, often causing death due to its poisonous gland that is often sold and eaten. Its round shape and protruding spines also make it resemble a naval mine. Its oversized spines may also take inspiration from other venomous marine animals including sea urchins and lionfish.

Overqwil is a portmanteau of "overkill" and "quill" or "Qwilfish". 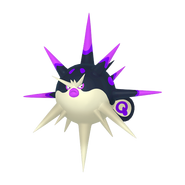