Oshawott is a bipedal, mammalian sea otter-like Pokémon. It has furs covering its entire body, with white fur on its face and arms, light-blue fur on its chubby torso and a dark blue tail, feet and ears. Its face features freckles on each cheek. It also has a tan-colored scallop shell attached to its stomach called a "scalchop", which is made of keratin (the same substance as human hair and fingernails). If broken, its scalchop can regrow.

Oshawott are mostly mischievous and slightly aggressive. When they feel bored, they will play with their Scalchop, making a "pound" sound. Many trainers pick Oshawott at the beginnings of their journeys in Unova based on their cuteness. Though these Pokémon may act tough, they are also quick to cower and flee when situations become too intense for them to handle.

Oshawott are born with scalchops attached, and simple shells found on beaches will not suffice as substitutes. Scalchops consist primarily of a combination of chitin and calcium carbonate—their composition is nearly identical to that of an Oshawott's claws, which are normally retracted. These Scalchops are also as sharp as blades, and are used to slash at foes and keep them at bay. Oshawott also use scalchops to slice open hard Berries when eating and thick vines when traveling. Because they rely on their scalchops so heavily, Oshawott will guard them with their lives. Their unique weaponry and charming personalities make them a common choice for Unova trainers.

Oshawott's scalchop can be removed from their bellies and used as a sword for specific attacks, such as Razor Shell, and can also be used to deflect attacks.

Oshawott is based on a sea otter. The scalchop on its stomach may reference how real sea otters lay on their backs and hold the invertebrates they eat on their stomachs and sometimes use their shells as tools. As the Unova starters are based on historical empires, Oshawott is based on the Japanese Empire.

Oshawott may come from otter, wash, and water.

Its Japanese name, Mijumaru, may be derived from 水 mizu (water) or 未熟 mijuku (naive), and 丸 maru (circle, likely either because of its plump appearance or because said kanji was often used in male or samurai names). 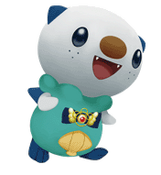 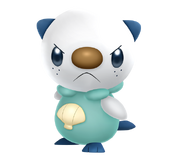 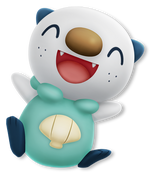 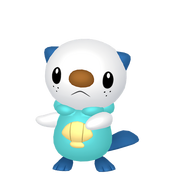 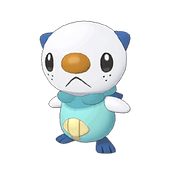 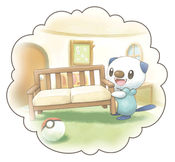 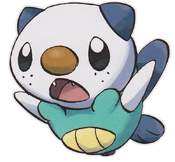 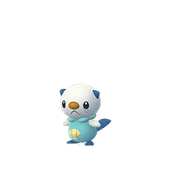 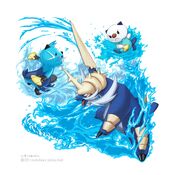