Orbeetle is a small Pokémon resembling a bipedal ladybug with two arms and legs. Its head is white, with a black ridged marking running down the top to its red insect mouth. Its eyes are light blue with concentric white circles in them to give them a hypnotic appearance, and a thin red marking runs under them to join the mouth. Two long yellow hairs that resemble eyebrows or eyelashes border the top of each eye. A red shell protrudes from the back of the head, divided down the middle and connected to the head by a black marking that surrounds the head. Seven blue dots appear on this shell. Its body is small and thin, with larger segments where the arms and legs emerge and a red triangle-shaped segment at the very bottom of the larger bottom segment. Its arms are thin and its hands have two long digits with claws at the ends, and its legs are thin with larger segments at the "knees" from which triangle-shaped yellow feet protrude.

As Gigantamax Orbeetle, its shell grows much larger and now resembles a UFO. Yellow lights can be seen on the bottom of its shell surrounding a large beam. There are now far more blue dots on the top of its shell, and the original dots have become light blue domes resembling its eyes.

Orbeetle is well known for possessing high amounts of intelligence, which is shown in its huge brain mass. It releases psychic energy to observe its environment, including those six miles away. As soon as they sense danger, they will begin formulating a plan of attack. By the time enemies actually arrive, Orbeetle will have prepared an impenetrable strategy for victory. Orbeetle are also believed to be able to influence the minds of others that are near them. It is said that these Pokémon remember those who had terrorized them as Blipbug and Dottler, and will use their immense intelligence in order to concoct ways to torment them in turn. If a person is ever faced with a problem that seems specifically designed to ruin their day, it is thought that may have unknowingly angered a Blipbug some time in the past.

After absorbing Gigantamax energy, Orbeetle has greatly increased its intellect and brain size.

Orbeetle's abilities are Swarm, Frisk and Telepathy. Swarm will power up its bug moves if it has low HP. Frisk allows it to see the opponent's held items. Telepathy allows it to evade moves used by allies. This ties in well with its powerful psychic abilities, which range from being able see far away places, to brainwashing entire populations when Gigantamaxed.

Via the use of its signature Gigantamax move, G-Max Gravitas, it can also control gravity.

It resembles a ladybug. Its species name may suggest it is based on the coccinella septempunctata, a species of lady beetle native to Europe. It also has characteristics of extraterrestrials and flying saucers. Its Psychic type could reference how some aliens in various media are able to use telekinesis to battle or abduct people. Taking from its previous evolutions being based on nerds and scientists, it may also be based on a mad scientist. As it's the first fully-evolved Bug/Psychic type Pokémon, it may possibly be a reference to Psycho Mantis, a boss from the 1998 Konami game Metal Gear Solid with an insect-based codename and psychic powers. Orbeetle's idle pose (legs straight down, arms stretched out at acute angles from its body) resembles Mantis's idle pose somewhat.

Its Gigantamax form resembles a flying saucer even more, furthering its possible extraterrestrial design inspiration. Its increase in brain power and vicious nature stated in its Pokédex entries may take inspiration from super-villains who often take over the world by brain-washing entire populations.

Orbeetle comes from the words "orbital", "orb" (a circle or sphere, referring to its shape), and "beetle".

Iorubu comes from Io (a moon of Jupiter, connecting to its space theme, "ee-oh" being the Japanese pronunciation), "orb" (from its circular shape or possibly from orbit), and possibly "ruby" (from its red color). It may also incorporate eol (Irish Gaelic for "knowledge", as Ireland was formerly a territory of the UK) or 夜 (yoru, Japanese for "night," as most celestial bodies are only visible from Earth at night). 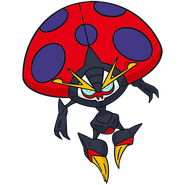 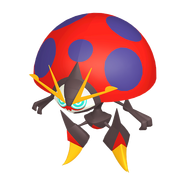 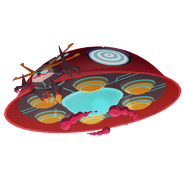