Oranguru (Japanese: ヤレユータン Hepburn: Yareyuutan) is a normal/psychic-type Pokémon introduced in Generation VII. It is exclusive to Pokémon Moon.

Oranguru is an ape pokemon. It has a white fur, grey skin, a wide face with a 4-edged star on its forehead and a cloak resting in its back. It is always seen to be holding a fan made from leaves in its right hand.

Oranguru are kindhearted Pokémon that help other ill or wounded Pokémon. 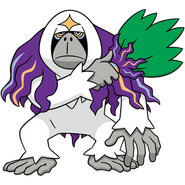 Add a photo to this gallery
← Comfey | Oranguru | Passimian →
Retrieved from "https://pokemon.fandom.com/wiki/Oranguru?oldid=1209429"
Community content is available under CC-BY-SA unless otherwise noted.