Opal in other languages

Opal is a character in Pokémon Sword and Shield, who initially serves as the Gym Leader of Ballonlea Stadium. A user of fairy-type Pokémon, Opal is the oldest and longest-tenured Gym Leader in the Galar region—having served the role for seventy years—but feels she has outgrown her position and uses her Gym Mission as a means of finding a successor. During the events of the game, the player character and Hop both fail the audition, but Opal eventually finds potential in Bede and takes him under her wing. After the player character becomes Champion, Opal retires and officially names Bede the new Gym Leader of Ballonlea Stadium.

Opal is old, wrinkled, and has white hair. She is also hunched over, pale-skinned, and has a long, pointy nose, not unlike that of a witch. However, despite her age, Opal still wears makeup, as she puts on purple eyeshadow and red lipstick. Her eyes are also the same blue that they used to be. For clothing, Opal wears a very long pink and green dress, a green and black hat, and white shoes with purple fuzz on them. To complete her outfit, she wears three arm bangles that match her dress, a black and pink glove, and a gigantic poofy purple scarf with three white mothball-like baubles hanging from it. She also carries a pink and green striped umbrella with a poofy purple design that matches her dress and scarf—when she is defeated in battle, she can be seen throwing it in surprise.

In the past, however, Opal was a beautiful, slender woman with black hair, fair skin, and a standard nose.

Opal is generally a calm and friendly person, but she has a tendency to be particular at times. During her Gym Mission, she has high expectations for the Pokémon Trainers facing her because of her pursuit of a successor and is quick to chastise Gym Challengers that fail to live up to her qualifications.

Although Opal claims purple to be her favorite color, she has a bizarre fascination with the color pink and tries to find elements of the color in others. She mainly attempts to find "pink" in Gym Challengers, but is unable to do so until she meets Bede. Opal is adamant on finding a successor and can be rather forceful in this respect. She will insist on having anyone do what she wants regardless of where they stand on the matter.

Opal appears to dislike being acknowledged as old. During the Galarian Star Tournament, she will berate Bede for almost calling her old if she if pitted against him. The final quiz during her Gym battle is identifying her age, but if the player should answer "88" as their response, an offended Opal will criticize the player for insensitivity. Should the player answer "16" as the response, Opal will happily accept that answer instead.

She has a penchant of deliberately giving out tricky quizzes as well, claiming that they can make people reveal their true colors in a pinch. Many speculate, however, that she does so merely out of spite.

Despite her old age, Opal is skilled at Pokémon battles and is nicknamed "the wizard" for her ability to predict what moves opponents will make in battle.

Seventy years prior to the events of the second Darkest Day, Opal became the Gym Leader of Ballonlea at the age of eighteen, inheriting the role from her mother. Twenty years after being instated, she almost became Champion after she reached the finals of the Champions Cup where she faced fellow Gym Leader Mustard, a Fighting-type specialist. Despite her Pokémon having the type advantage over those used by Mustard, Opal lost the battle, allowing Mustard to become Champion.

At the age of eighty-eight, Opal continues to serve as Gym Leader of Ballonlea, but feels that she has reached her limits and decides to find a successor. As a result, her Gym Challenge takes the form of an audition.

Though worthy challengers usually pass the battle parts to meet her in the stadium, Opal is also secretly judging their potential to become the next Ballonlea Gym Leader by the amount of "pink" they possess, based not only on appearance, personality or Pokémon, but by another personal standard that she never discloses outright. Her records backstage are filled to the brim with papers of challengers who defeated her in battle but failed the audition, including those of Leon and Sonia, suggesting that she has been conducting this Gym Challenge format for a long time, and with no prospective candidate in sight.

When the player challenges her, she is still searching for an apprentice to take over her Gym. After the player character defeats her, she is impressed by their strength but does not appoint them her successor. She asks them to accompany her to Hammerlocke afterwards; upon their arrival, they inadvertently run into Bede, who had his status as a Gym Challenger revoked. Opal is intrigued by his pink quotient and immediately offers to mentor him. Bede hesitantly accepts the offer and Opal returns to Ballonlea with him.

During the post-game events, Bede has completely taken over for Opal as the Ballonlea Gym Leader. Nevertheless, Opal remains at her former Gym as an adviser to Bede. When Leon creates the Galarian Star Tournament, Opal is one of the Trainers invited to participate and teams with Bede during the first outing of the tournament. After the player wins six competitions, Opal will be available as a partner. 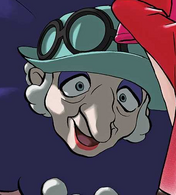 Opal praises the player after they defeat her.
Community content is available under CC-BY-SA unless otherwise noted.
Advertisement