Olympia is a character appearing in Pokémon Adventures, who is the Gym Leader of Anistar City in the Kalos region.

Olympia is a dark-skinned woman, having curled purple hair and violet eyes. Olympia wears a pair of star-styled earrings, a black suit with a steel color on her shoulders, two rings around her arms, as well as grey ballet-like shoes. Olympia also wears a silver cloak, with star pattern underneath. She also wears red lipstick and white nail polish.

Olympia is a responsible woman, who uses her psychic powers to assist her allies.

Olympia appeared with Grant and Valerie, being introduced to Trevor. Olympia, like Valerie and Grant, were worried about the plans Team Flare was conducting and decided to join in to fight them. When Valerie was asking Trevor whether the Laverre City's tree or Xerneas tree look more majestic, Olympia had Meowstic pull Valerie, for they had to be going.[1]

Olympia, Valerie and Grant joined Ramos and Wulfric, then sailed on Wulfric's Avalugg to Laverre City. There, the children from Vaniville Town joined in the attack on Geosenge Town. Upon seeing the Ultimate Weapon, Wulfric ordered Olympia to use her psychic power to seal the Ultimate Weapon, though Olympia admitted it would be a hard task. Everyone sent their Pokémon to push the "bud", with Olympia sending her Slowking.[2]

During the crisis, Olympia ordered Tierno, Shauna and Trevor to go underground and find Xerneas and the controller to the Ultimate Weapon, while the rest would try to suppress the "bud".[3] To protect themselves, as well as Y and the other Gym Leaders, from the blast of the Ultimate Weapon, Olympia and Valerie had their Pokémon create a barrier from the blast. After Y managed to befriend Xerneas, everyone held Xerneas, including Olympia, as Xerneas flew off, retreating from the site of battle.[4]

Olympia and the other Gym Leaders fought against Team Flare, eliminating their presence in other cities before they went to the Pokémon Village.[5] In the end, Olympia came with Professor Sycamore to congratulate the group of Vaniville Town for defeating Team Flare.[6] 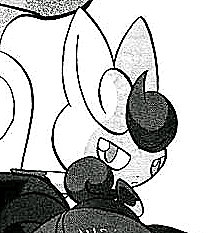 Retrieved from "https://pokemon.fandom.com/wiki/Olympia_(Adventures)?oldid=1002614"
Community content is available under CC-BY-SA unless otherwise noted.