For the variant appearing in the games, see Olivia.

Olivia is a character appearing in Pokémon Adventures.

Olivia is a dark-skinned woman with dark brown eyes and black hair that reaches to her shoulders. She has pink crystal earrings, a crystal necklace and a crystal ring on her right hip. She also wears light pink lipstick. She wears a light pink midriff top and dark pink shorts with light pink sandal heels. She wears many anklets around both ankles and equal amounts of bracelets on her left arm. Olivia also has a Z-Ring around her left arm and has a teal nail polish.

As noted by Nanu, Olivia has a wild personality and can become furious at a moment.

Hala invited Olivia and Nanu to a meeting. The Kahuna reported seeing the Tapu Pokémon: Tapu Bulu, Tapu Fini, Tapu Lele and Tapu Koko. Hala recalled these island guardians usually lived in the caves and explained they were angry.[1] Olivia had a battle against Nanu, using Lycanroc against his Persian. Lycanroc used Rock Climb, but was countered by Persian's Nasty Plot and Dark Pulse combo. Nanu started insulting Olivia for her aggressive tactics, claiming she had no strategy in battle, just like in her relatiohsip. Olivia became furious and used her Z-Ring to have Lycanroc use Continental Crush, while Nanu did the same with Persian, who used Black Hole Eclipse. Hala interfered, causing Lycanroc to hit him with the Z-Move. Olivia and Lycanroc regretted this and started to apologize, while Nanu shook his head. Hala was nevertheless impressed by the platform, as the youth, the following day, would battle in the Festival. Hala also told the winners would go to face the Tapu Pokémon and try calming them down. Nanu saw that was imitating the island's tradition, while Olivia saw they, as Island Kahuna, couldn't face the Tapu Pokémon twice, nor could the Trial Captains.[2]

The following day, Olivia encountered Moon, who was worried about Sun. Moon explained Sun wasn't really her friend, but Olivia thought Moon's acting meant that she actually deeply cared about Sun. Per Olivia's proposal, Moon helped her in distribution of malasada, to decide the challengers' match-ups. After visiting the Team Skull grunt, the two came to the Masked Royal's tent; Moon was startled by his appearance, thinking he was going to fight instead of his Pokémon. They visited Hau, who jumped to take malasada, even if he was reminded by Olivia he could take only one. Olivia and Moon found the next tent empty, only a note that the challenger would was briefly absent. After visiting Sun, the two came to the last tent, where they found a girl. The girl went to explain that she actually entered by mistake, but her Nebby came out of her bag and floated away. Olivia ran after the two and was in shock to see that Moon was rescued by Tapu Koko. The girl, Lillie, wanted to withdraw from the Festival, but Moon persuaded Olivia to battle in her stead.[3]

Olivia watched the battles and was angered that Guzma barged in, attacked the Team Skull grunt and declared he'd take the grunt's place. Olivia refused to let him do so, but Guzma reminded them that Moon took someone else's place, so Hala let him take the place as well.[4] Olivia watched Sun battle Guzma and was shocked that his Golisopod broke Sun's arm. Olivia asked of Hala to stop the match, fearing that Guzma might also win. Hala refused, stating this is a trial of strongest, as they didn't need the weak for their quest. After Guzma was defeated and he decided to leave, Olivia claimed that he would have to stay and watch the other battles, since he enlisted for the battles. Guzma asked if "the great Guzma" was ordered by an *old* hag. These words made Olivia nearly faint, and was held by Nanu.[5] Nanu and Olivia watched Sun and Gladion battle. Olivia asked Nanu whom did he think who'd win. Nanu claimed Gladion would certainly win, but was still interested in his Type: Null, sensing he saw its mask somewhere else. He promised to look into the records back at his house, noting Gladion bore a heavy burden. Olivia recalled how Gladion stated he'd wish to meet the Tapu Pokémon after the tournament was over, which made Nanu even more interested in Gladion.[6]

Hau heard the talk between Hala, Nanu and Olivia. Hala saw one of Team Skull's members were one of the trainers he tutored, and expressed his regret not to have taught that person that winning and being the best was not everything to Pokémon battles.[7] Kiawe spoke about Olivia, whom he, Lana and Mallow respected as Island Kahuna. Though they did respect the Island Kahuna's wish to have Sun take on the Island Challenge, Kiawe told he, Lana and Mallow would test Sun's abilities as Trial Captains.[8]

Hala talked to Nanu and Olivia, and the three agreed to have Hapu as the new Island Kahuna of Poni Island. As Hala proceeded to phone her about the good news, Nanu decided to leave, since he wished to take part in the fight with the Trial Captains against the Ultra Beasts. However, Nanu was nearly assaulted, as two Ultra Beasts, which had attacked Kahili, destroyed a part of Hala's house. Hala ordered Olivia and Nanu to return to their islands, as he stood his ground firmly to defend Melemele Island. Olivia and Nanu ran off, and the latter assured the former that Hala would be fine, since Ilima and Hau were coming to Melemele Island, and they had to protect their islands, too. Olivia feared for Hapu, whose duty just became to protect Poni Island. Nanu thought if Hapu were to fail, the Guardian Deity, Tapu Fini, would protect the place. He was more concerned about Sun, the boy from Kanto, who was given the Sparkling Stone, and felt something about that could solve their problems. Olivia sensed Nanu's police officer instinct in him, but Nanu claimed he was just "cursed" to think like that. The two parted ways, though Nanu reminded Olivia not to do anything rash.[9]

With the arrival of the Ultra Beasts on Poni Island, Olivia started her training to fight them.[10] She crafted a Z-Ring for Hau, using a Sparkling Stone he had. With Kahili, Olivia saw on Exeggutor Island that Hala wanted to train Hau. Olivia and Kahili became pleased, and went to Hokulani Observatory, where the Trial Captains were preparing for their expedition to Mount Lanakila. Olivia planned on giving Kiawe his Z-Ring, while Kahili opened a briefcase, showing the many Z-Crystals she had collected over the past six months. Olivia took an odd-shaped one, and wondered if it, too, was a Z-Crystal.[11]

At Hokulani Observatory, where Olivia and Kahili had arrived, Olivia observed as Kiawe got his Z-Ring back. Nanu joked that Kiawe and the rest could count on old-timers regarding move powers, but Olivia felt insulted, as she added only Nanu was the old one. Sophocles led the group to the Vikavolt airship, which he redesigned from the machine that could summon Totem Pokémon. Olivia admitted she felt safer while riding Kahili's Skarmory, so Sophocles' Togedemaru electrocuted everyone to go inside. Inside, the group revised that the crack in the sky had been opened at Mount Lanakila, and suspected that Sun and Moon came out. Molayne reminded they would have to fight the Ultra Beasts, but exclaimed the importance of rescuing Sun and Moon out of there. Suddenly, the airship got hit. The Vikavolt airship crashed, as they were attacked by the Ultra Beasts, and the Aether Foundation employees.[12] With the arrival of the four Guardian Deities, Olivia went out of the aircraft. She teamed up with Tapu Koko on divering some of the Ultra Beasts to Melemele Island, where her battle would continue. She called Hala to report what happened there, and asked of Hala to protect Poni Island before logging out.[13] Once Necrozma was captured into a Beast Ball, Olivia witnessed many of Ultra Beasts fleeing to the Ultra Wormhole. She called Nanu to tell him this, who suspected the Ultra Beasts had been threatened by Necrozma, and with that threat gone, they could safely return to their homes.[14] 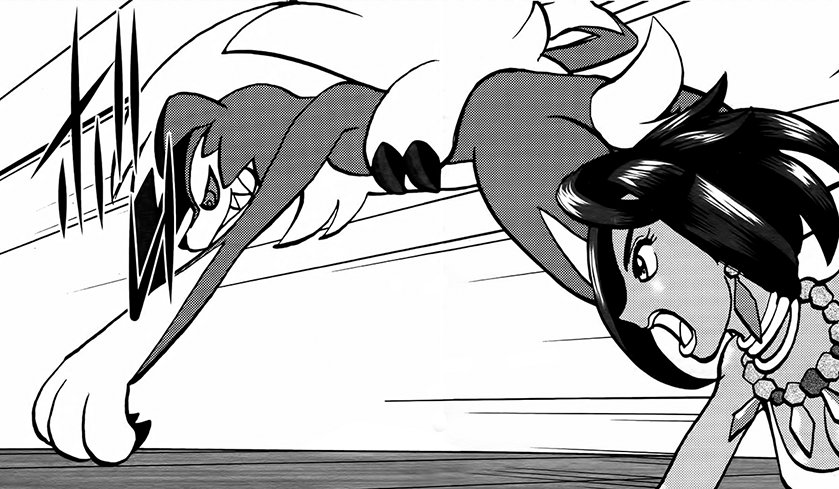 Retrieved from "https://pokemon.fandom.com/wiki/Olivia_(Adventures)?oldid=1262422"
Community content is available under CC-BY-SA unless otherwise noted.