コトキタウン
Kotoki Taun
Oldale Town
Oldale Town is a city located north of Littleroot Town and Route 101, east of Route 102 and south of Route 103. This is the first town the player character visits that has a Pokémon Center.

Here is the list of items sold in the Poké Mart in Oldale Town. The player character meets a famous person there.

The price for items at the Poké Marts is consistent at every shop across Hoenn. 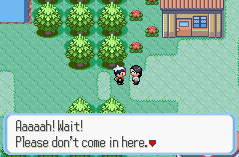 The player character initially can't access Route 102 as it is blocked by a researcher sketching what he believes are footprints from rare Pokémon. To access it, they must go to Route 103 to defeat Prof. Birch's child and then come back to the place again. The researcher will step aside and say "I finished sketching the footprints of a rare Pokémon, but it turns out it was my own footprints".

This Pokémon Center is located in Oldale Town. Here, the player character can heal their Pokémon if they are low on health or are fainted.