A Better Pill to Swallow

Old Man Shuckle was a herbalist that approached Ash, Misty and Brock. He gave Ash some berries that cured his stomachache. He invited them to his shack and showed he makes berry juice. He also requested a shiny Shuckle, who may even produce a juice that would attract any Pokémon, making Brock amazed as he can be the greatest Breeder. He gave them Spoopy, his Bellsprout, to aid them. When Spoopy found the shiny Shuckle, Team Rocket captured it and drank its juice. This caused many Pokémon to be attracted to them, so Old Man Shuckle sprayed powder to nullify the effects. Once Team Rocket were blasted off, Brock realized that he did not need that juice, as raising Pokémon manually is better than have them attracted. 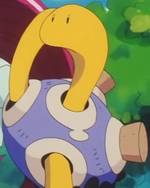