Cannot be sold
The Old Ball is an movie-exclusive item, appearing in Celebi: Voice of the Forest.

The Old Ball is the original version of the Poké Ball that serves as a precursor to the modern-day design of the Poké Ball. It was used by Sammy. This Poké Ball is able to release Pokémon by unscrewing the red lid on its top, and seems only to work by holding it away from the Trainer. It is relatively plain in its design, as opposed to its current design. The Old Ball has a grey surface area with a single black strip extending across its surface area. There are two small domes jutting out above the black strip, and there is a small red cap which serves as the release function. It seems that the Old Ball cannot be thrown to release its held Pokémon, primarily due to the fact that it is an outdated version of the current model.

In the film, Sammy used it primarily to store his Charmeleon. 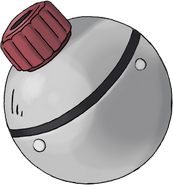