Officer Jenny is a police officer who lives in every city. They can be told apart only by Brock. She uses Growlithe and Arcanine as police dogs to search for thieves.

Originally they had blue hair until "Here's Looking At You Elekid" when the animation changed to digital effects changing their hair green.

The Japanese name, Junsar, means "police officer". The Jenny officers are often accompanied by Growlithe, to use as a police dog (although there are exceptions, like one had a Spinarak or where another has a Meganium, Parasect and Tangela or one that has the Squirtle Squad, etc.). There are some other minor differences between each of them, but not many as the Joys. The only differences are the symbols in their caps and uniforms (which are different depending on your region). Unova Region Jennys have the back of their hair and their bangs cut.

Much like in the games, most of the Officer Jennys have dark teal hair and fair skin. Others could have a lighter shade of hair color, or brighter or darker skin. The Kanto, Johto, Hoenn, and Sinnoh Officer Jennys wear a purple cap with a black rim, red top, and gold star, a purple collared shirt with red trim, a sky blue chestpiece, and gold shoulder pads, a black purse, a matching belt with a gold buckle, a purple skirt, black shoes, and white gloves. In Unova, Officer Jennys have a shorter hairstyle, a tan cap with a navy blue rim and gold symbol, a tan collared shirt with navy trim and a navy tie, a navy belt with a gold buckle, a tan skirt, navy blue shoes, and the same gloves. Kalos Officer Jennys wear a blue cap with a navy blue rim and new symbol, a white collared shirt with a navy tie and long blue vest, a belt with a strapless purse on it, a blue-gray skirt, brown leggings, navy boots, and the same gloves. Officer Jennys in the Orange Archipelago wore uniforms similar to the ones in Kanto, Johto, Hoenn, and Sinnoh. The only differences being a light blue cap, shirt, and skirt, a white chestpiece, and a different star shape on their caps. Officer Jennys could be distinguished from other Officer Jennys by the color of their cross, or badge on their hats.

One Officer Jenny from the Kalos region fell under the control of a rogue Malamar and assumed the identity of Madame X on its behalf. This Officer Jenny had no clue what she was doing, but discovered that Malamar was using her to begin reviving the Ultimate Weapon. 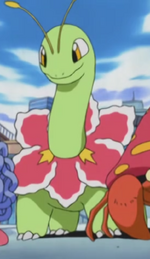 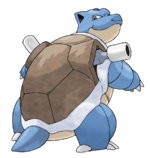 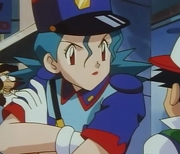 Officer Jenny in The Electric Tale of Pikachu manga.

A Group Photo of Officer Jennys in Hoenn

A Officer Jenny in Hoenn.

A Group Photo of Officer Jennys in Kalos.

Officer Jenny being hypnotized by an evil, rogue Malamar while being under the identity as Madame X.