Obstagoon (タチフサグマ, Tachifusaguma) is a Dark/Normal-type Pokémon introduced in Generation VIII. It is the evolved form of Galarian Linoone.

Obstagoon is a humanoid-mammalian Pokémon that resembles a bipedal badger. Its fur is mostly black and white, with gray tufts on its ankles and forearms. It has another patch of thicker gray fur around its back and the sides of its chest, resembling a vest, and a long tongue that frequently lolls out of its mouth.

Before striking with a brutal attack, Obstagoon taunt their opponents with the intention of goading them into attacking. They then cross their arms to perform their Obstruct move in order to lessen the damage of the oncoming attack.

They also know how to aim at their opponents' weak spots, and will retaliate with their honed claws.

Obstagoon have only been spotted in the Galar region, because of the harsh competition among species.

Obstagoon are known for their formidable physical prowess, mainly their brutish muscular arms and sharp fangs and claws. They are so physically strong that they can obstruct their opponents with mere roars and their crossed arms.

Obstagoon could be based on a European badger and heavy metal and punk rock bands. Its appearance and long tongue sticking out makes it resemble Gene Simmons from the band K.I.S.S, thus Gene himself acknowledged this Pokémon. Its association with heavy metal may also be a reference to the 2016 anime Aggressive Retsuko, in which the titular character, a red panda (in the same superfamily, Musteloidea, as raccoons and badgers) sings death metal to express her anger at her coworkers' incompetence. Retsuko's appearance when singing, like Obstagoon's, is based on that of Gene Simmons.

Alternately, its imposing stature and aggressive figure appears to take inspiration from unsavory depictions of bodyguards and bouncers, specifically "goons" or thugs with criminal backgrounds hired as muscle to aggressively gatekeep more criminal elements. Its Normal typing in addition to its Dark typing further highlights its depiction in popular culture, as they tend to be small fry for a protagonist to fight off before facing their boss.

Obstagoon is a combination of "obstacle", "obstruct" (to block), "obstinate" (stubborn) "raccoon", and "goon". 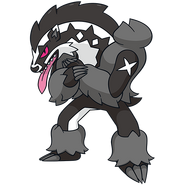 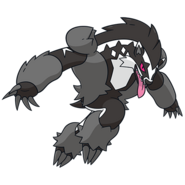 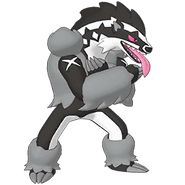 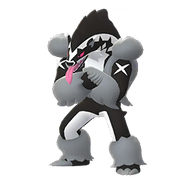 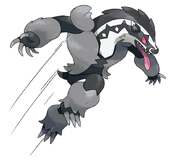 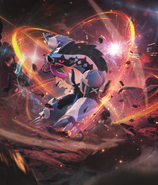