Red and Green came from Kanto to stop Maxie and Archie, who stole the Red and Blue Orbs from Bill. Ruby and Emerald, however, track Groudon and Kyogre and find Blaise and Amber, who forced Hoopa to summon the giants.

Archie and Maxie exit the boat, having arrived to Hoenn. Archie and Maxie sense the Orbs are reacting, seeing the two markings of Alpha and Omega on them, hoping more powerful shapes will emerge. However, Archie and Maxie are ambushed by Red and Green, who decide to stop these two from ever fulfilling their goal, since they broke into the lab and injured a person. Red and Green introduce themselves as the Pokédex Holders from Kanto and send Saur and Blasty into the battle. Maxie and Archie see these two have followed them from Kanto and send Camerupt and Sharpedo to counter-attack. Saur attacks Sharpedo, while Blasty hits Camerupt. Maxie and Archie wonder how Red and Green came so fast from Kanto. Red claims he and Green are friends with Bill.

A few weeks ago, Red contacted Bill, who showed Red the Blue and Red Orbs are gathering power and are changing their shape. Bill reminds Red, during his fight in Sevii Islands, Deoxys could change forms - in Kanto, it had Attack and Defense Form, while in Hoenn the Speed and Normal Form. And to gain full power, Team Rocket had to take the Orbs (dubbed as Ruby and Sapphire stones) and use it on Deoxys. Red remembers the Ors re-created the climate from Hoenn. Bill confirms this and remembers Lanette and Brigette have been researching the Orbs, but had no results. However, they know the Orbs store natural energy and change their appearance. Bill is slightly scared, so Red decides to come over, since Blue is away from Kanto. As such, Red called Green. The following morning, Red, Green and Daisy Oak found Bill wounded, his lab destroyed. Luckily, Bill gave Red and Green the tracking device.

Red and Green claim their actions has even reached the news, but people are more concerned about the meteoroid. Maxie and Archie mutter, so Red suspects Maxie and Archie have some connection with the meteoroid. Maxie and Archie claim they don't wish to waste more time and trigger their Key Stones, Mega Evolving Camerupt and Sharpedo. In response, Red and Green lift their hands and press the Key Stones on their rings, Mega Evolving Saur and Blasty. On the ship, Ruby and Emerald saw Hoopa sending Kyogre and Groudon, through the rings, into the sea. Blaise and Amber are glad their plan succeeded. Amber and Blaise see the Orbs are returning to Hoenn and will be glad if their holders are their leaders. Ruby tells Emerald these are Groudon and Kyogre he fought four years ago. Emerald is mad at Hoopa, but Ruby holds Emerald, for they have to do something about Groudon and Kyogre first. Ultima, Drake and Mr. Briney come and notice the giants have come.

Blaise claims Groudon and Kyogre are going towards the Orbs, which are not in their possession. Blaise has Slugma use the flames to confuse Ruby and Emerald with its illusions (the images of rings, with two eyes staring at them), while Blaise and Amber go away, following Groudon and Kyogre. Blaise plans on attacking the person holding the orbs (if it is not his leader), then take the Orbs and primal revert Kyogre and Groudon. Blaise and Amber come to a rock and see emblems of Magma and Aqua. However, Amber and Blaise do not recognize their leaders, who turn their heads around.

Elsewhere, on a bridge, an old woman looks to the sky and sees something flying. Toma-Toma, Jinga and Renza arrive, who report two Legendary Pokémon have arrived and ask the elder's permission to go. The elder asks if they found Zinnia, but they deny. The elder dismisses the Draconids to finish their task, for the elder saw the sacred dragon's cloud trail. 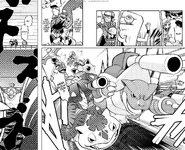 Add a photo to this gallery
Retrieved from "https://pokemon.fandom.com/wiki/ORAS012:_Omega_Alpha_Adventure_11?oldid=1288728"
Community content is available under CC-BY-SA unless otherwise noted.