Noibat is a small winged mammalian Pokémon that resembles a baby fruit bat. Its body is covered in purple fur of various shades, with black patches of scruffy fur encircling its neck and on its legs. Its scruffy head is light purple with a patch of dark purple fur just above its mouth. Noibat has large yellow ovular eyes with slit pupils. Its ears are quite large and round, with rings of dark purple and black on the insides. It has tiny black claws attached to its small light-purple wings. Dark purple flaps of skin connect its tiny wings to its body. Its belly is light purple, as well as its small dangling feet.

Noibat can be found in dark caves where little to no light penetrates. Because vision is largely useless in these areas, Noibat have adapted to navigate their surroundings through echolocation.The pitches that Noibat use for echolocation can be disorienting even to people and Pokémon that do not consciously hear them; pro-wrestlers trained to maintain their balance can become dizzy when near these Pokémon. People traveling in Noibat caves often become lost because of the disorienting sounds. Noibat use this ability when threatened to confuse foes and escape

Since it uses sound waves to detect the ripeness of fruit, it won't eat fruit that's sour resulting in it being a picky eater.

Noibat has a great sense of hearing and it can attack with sound waves causing great damage to their opponents and for echolocation. It can use sound waves to tell whether a piece of fruit is ripe or not.

Noibat evolves into Noivern at level 48.

Noibat is based on a bat with its ears resembling bass speakers. It may be based on the concept of bats using echolocation to move around, a form of communication that involves sound.

Noibat comes from noise and bat.

Its Japanese name, Onbat, comes from the words on (sound), onpa (sound wave) and bat. 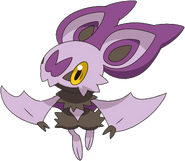 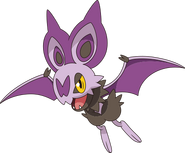 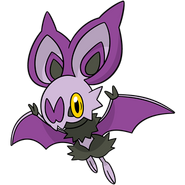 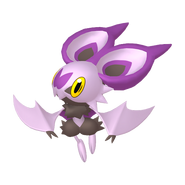 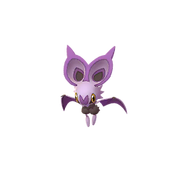