Ultra Deep Sea
This Nihilego is a Rock/Poison-type Pokémon that appeared in the anime. It is the main antagonist of the first half of Pokémon the Series: Sun & Moon - Ultra Adventures.

During Lillie's childhood, Nihilego attacked her, causing Lillie to develop a crippling fear of touching Pokémon.[1] However, Lillie was protected and saved by Gladion's Silvally.[2]

It was released again after Faba used Nebby's power to open up the Ultra Wormhole. Ash, Gladion, and Lusamine battled Nihilego to protect Lillie from getting attacked, but none prevailed. Just as Nihilego was about to attack Gladion, Lusamine pushed her son out of harm's way and allowed herself to be taken instead. Then Nihilego carried Lusamine into the Ultra Wormhole, leaving Lillie and Gladion behind.[3]

It is later revealed that after Nihilego abducted Lusamine, it became obsessed with her dark side and decided to take advantage of it. Nihilego fused its body and powers with Lusamine and corrupted her will and personality to become as evil as the Ultra Beast itself. As Ash and the gang entered Ultra Deep Sea, the gang tried to persuade her. But due to Lusamine's corrupted personality, she started acting like a child and kept telling them to go away as she claims that the Ultra Beasts are her own possessions. Thinking that Ash and the gang are trying to take the Ultra Beasts away from her, Lusamine was forced to use her Pokémon, who are possessed by Nihilego's power, to battle them.[4]

Despite being stalled by Lusamine's Pokémon, Ash, Nebby, and Pikachu managed to track down Nihilego. Ash tried to rescue Lusamine, but Nihilego kept whacking him away with its tentacles. Gladion, Lillie, Silvally, Snowy, and Lusamine's recently freed Clefable arrived to join them. Nihilego kept attacking the group until Lillie stepped up and yelled out how much she hates her mother's corrupted personality. Lillie reminded her mother of how she always treated her like a baby, but also reminds her that she's even more of a spoiled person than her daughter since she kept her research on Ultra Beasts for a very long time. Lillie says that she may be a strong person, but due to her obsessions with Ultra Beasts, she is now nothing more than a puppet who can't let herself move on her own. Lillie begs her mother to come out of Nihilego and let her obsessions go. But just as Lusamine was about to reach out to her daughter, Nihilego refused to release her and engulfed her inside its bell. Gladion assumes that just like Lusamine wanting to see Ultra Beasts, Nihilego itself wants to learn about human beings, no matter how good or bad they are. Nihilego proceeds to attack the group, until Ash's Electrium Z-Crystal temporarily changes into a Pikashunium Z. Ash and Pikachu perform the Z-Move, 10,000,000 Volt Thunderbolt and defeated Nihilego. Gladion and Lillie pulled Lusamine out of Nihilego, causing it to diffuse with her. With its true power gone, Nihilego paid the ultimate price for its greed and floated away in defeat.[5] 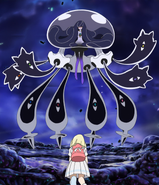 Fused with Lusamine
Add a photo to this gallery

Retrieved from "https://pokemon.fandom.com/wiki/Nihilego_(anime)?oldid=1351070"
Community content is available under CC-BY-SA unless otherwise noted.